COVID-19: Bangladeshi communities and Pakistani men most at risk of dying from coronavirus during third wave 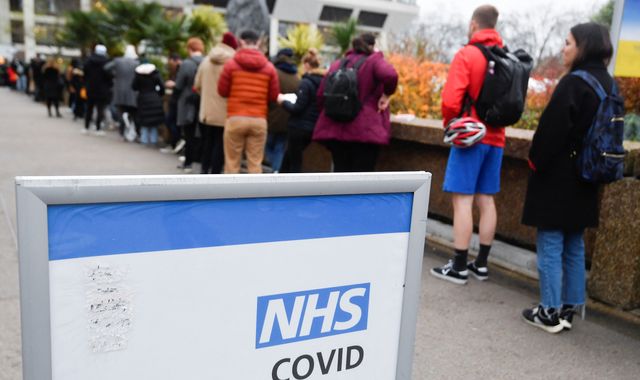 Bangladeshi people and Pakistani men living in the UK were most at risk of dying during the third wave of COVID, despite the efforts of the vaccination programme, new research suggests.

Data released by the Office for National Statics found people from these two groups remained at higher risk of death from COVID-19 during the third wave – even after adjusting for vaccination status.

From 13 June 2021 onwards, the risk for Bangladeshi communities from the virus was 4.4 and 5.2 times greater than white British men and women.

It was more than two times greater even when adjusting for vaccine status and other variables such as socio-economic factors.

During the third wave, Pakistani men were found to be 3.5 times more likely to die from COVID than the white British group.

Even when factoring in vaccine status and other relevant variables, they were still 1.2 times more likely to die from COVID.

“Remaining unexplained risk may be attributable to factors that we have not been able to account for in the analysis,” the research said.

“The Cabinet Office Race Disparity Unit has explored the evidence around COVID-19 risk factors, but further work is needed to increase our knowledge and understanding of the possible mechanisms underlying this unexplained risk.”

This does not suggest the vaccine is not effective within these groups but means differences in vaccination coverage does not explain the observed differences in mortality risk.

Vaccines explain mortality in other groups

However, the study also found vaccine uptake did explain a large part of the differences in mortality between other ethnic groups.

The rate of death involving COVID-19 has been higher for almost all ethnic minority groups throughout the pandemic, and this was seen again during the third wave, from 13 June 2021 onwards.

While factors – such as geography and age – explained some of the excess risk, differences in vaccine uptake explain the rest.

For example, men and women from black Caribbean and black Caribbean backgrounds were seen to be at a higher risk from COVID – two groups with the lowest vaccination rates among those aged over 50.

But adjusting for vaccination status (alongside other factors) eliminated the excess risk for these groups and suggested they were at no greater risk than the white British population.

Vahé Nafilyan, senior statistician at the ONS, said: “Today’s analysis shows that since the vaccination programme began, the risk of death from COVID-19 has continued to be higher in most ethnic minority groups than in the white British ethnic group.

“As already highlighted in our analyses of earlier periods, these differences in mortality are largely explained by socio-demographic and economic factors and health.

“For the first time, we show that the lower vaccination coverage in some ethnic groups also contributes to the elevated risk of COVID-19 death, particularly in the black African and black Caribbean groups.”

Nine in 10 young teenagers have antibodies

Separate data released by the ONS also found approximately 98% of the UK’s population now has COVID-19 antibodies and nine in 10 young teenagers are also likely to have antibodies.

It is the first time data has been published for this age group.

It takes between two and three weeks after infection or vaccination for the body to make enough antibodies to fight the virus. Antibodies then remain in the blood at low levels, although these levels can decline over time to the point where tests can no longer detect them.

The figures have been calculated by the Office for National Statistics (ONS) and are based on a sample of blood test results for the week beginning 3 January 2022.

The very high level of antibodies among young teenagers reflects both the prevalence of coronavirus but also the impact of the vaccination programme, with first doses made available for 12 to 15 year olds in September 2021.

Second doses are now being rolled out to this age group.

The ONS said there is a “clear pattern” between vaccination and testing positive for COVID-19 antibodies but “the detection of antibodies alone is not a precise measure of the immunity protection given by vaccination”.

The ONS found between 4 January to 8 January, the majority (79%) of survey respondents who did test positive for the virus fully adhered to self-isolation guidance.

It comes despite 25% of people reporting they lost income as a result of having to isolate. Of those that were not retired, 17% said self-isolation rules meant they were likely to lose their jobs or miss out on work.