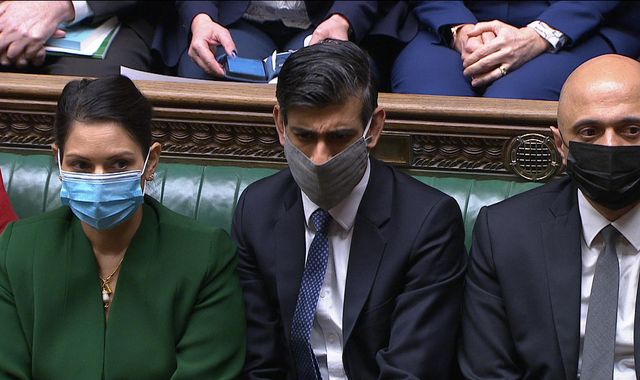 Chancellor Rishi Sunak has defended his handling of COVID support fraud as he vowed to go after those “who took advantage” of the scheme.

He said people are “absolutely right” to be concerned but tweeted: “No, I’m not ignoring it and I’m definitely not ‘writing it off’.

“Clearly criminals have sought to exploit our support schemes.”

Treasury Minister Lord Agnew dramatically quit his role on Monday as he said the government had shown a “lamentable” oversight of COVID loan schemes which has resulted in large amounts of fraud being committed.

And in Prime Minister’s Questions on Wednesday, Mr Johnson was asked by Labour MP Kate Osamor if he agreed to Mr Sunak “writing off £4.3 billion of fraud” from more than £80bn of job support – something the government has denied.

As Mr Sunak’s brow furrowed, Mr Johnson replied: “No, of course not. We do not support fraudsters or those who steal from the public purse.”

The PM’s initial “no” has raised further questions of a widening of views between the PM and the chancellor, who is one of the top bets to replace him as PM.

But his official spokesman later insisted the PM was saying he did not condone fraud, rather than he had not agreed with the chancellor.

‘Not writing off fraud’

Following PMQs, the chancellor tweeted a series of tweets defending his handling of the payments, saying he is “not writing it off”.

“We’re going to do everything we can to get that money back and go after those who took advantage of the pandemic,” he said

He said most people “did the right thing but we are still addressing incorrect claims”.

Remember ‘context at the time’

Last year, he said, the government stopped or recovered “nearly £2.2bn in potential fraud from bounce back loans and £743m of overclaimed furlough grants”.

Mr Sunak said it was important to remember “the context at the time”, with businesses needing urgent support which the government delivered “in record time with furlough and our loan schemes saving thousands of jobs”, he said.

In a dig at Labour, he added: “Some pointing at COVID fraud now are the same people who insisted, at the time, support should not be means-tested at all.

“Thanks to the action we took we’re now seeing a thriving labour market and the economy has now grown above pre-pandemic levels, faster than predicted.”

Share
Facebook
Twitter
Pinterest
WhatsApp
Previous articleDowning Street parties: Which No 10 staff could lose their jobs as a result of Sue Gray’s partygate report?
Next articleCarer who suffocated suspected thief during citizen’s arrest cleared of manslaughter