Boris Johnson: Sue Gray has received photos of parties in Downing Street which show the PM next to wine bottles, Sky News understands 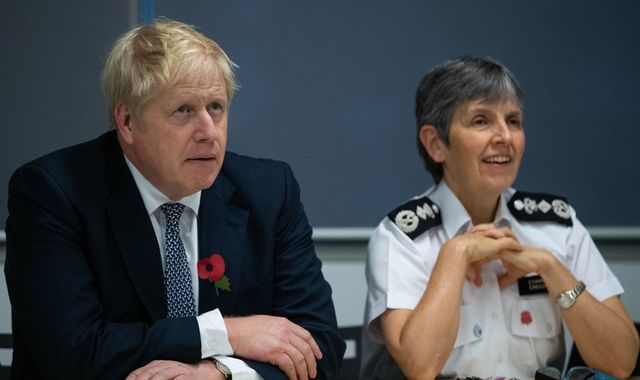 Sue Gray has received photos of Downing Street parties which include Boris Johnson and others close together with wine bottles, Sky News understands.

The latest revelation comes shortly after a government source said senior civil servant Ms Gray’s report into parties in Downing Street and Whitehall that may have broken COVID rules could be published as soon as today.

Sky News understands Number 10 has yet to receive a copy of the report, but that once it is received, it could be published within hours.

The prime minister has vowed to make a statement and answer questions in the House of Commons after its publication.

Earlier on Tuesday, Metropolitan Police Commissioner Dame Cressida Dick announced that the force was investigating “a number of events” for potential breaches of COVID-19 regulations.

Sky News understands the Met has not raised an objection to the Cabinet Office inquiry being released before its criminal investigation has concluded.

Gray report could be published as soon as today

Downing Street reiterated on Tuesday afternoon that the government wants the report to be published “as soon as possible” and insisted Number 10 is not trying to block its publication.

The prime minister’s official spokesperson told reporters talks are taking place between Ms Gray’s inquiry team and the Metropolitan Police to decide what can be published from her investigation into the ‘partygate’ row.

Ms Gray’s report is likely to provide a factual account of what happened at a number of alleged parties, and may present a judgement on whether the events breached rules in place at the time.

Earlier this month, the PM issued an apology in the House of Commons for attending an event in the Number 10 garden on 20 May 2020, claiming he thought it was a “work event”, and asked people to wait for Ms Gray to publish her findings.

Mr Johnson’s leadership is under severe pressure and could be put to a vote if more than 54 Conservative MPs submit letters of no confidence to the chairman of the 1922 Committee of backbench MPs.

Number 10 insist publication of Gray report is not being blocked

The prime minister’s official spokesperson told reporters on Tuesday afternoon talks are taking place between Ms Gray’s inquiry team and the Met Police to decide what can be published from her investigation into the ‘partygate’ row.

“There are discussions still ongoing between the investigations team and the police. I am not privy to those discussions, as I think you’ll appreciate,” he said.

“That still needs to be worked through, both in relation to what may or may not be published and the ongoing work of both the police and the (Gray) investigation.”

The PM’s spokesperson added that decisions on publication were a matter for the Cabinet Office and police and “we are not, as in Number 10, seeking to block that in any way”.

He added it “certainly remains the case that we would want it to be published as soon as possible”, but added: “I would not want to be perceived as putting undue pressure on either the investigations team or the police.”

Earlier today, Downing Street said the prime minister is willing to be interviewed by police but does not believe he has broken the law.

And speaking in the Commons, the prime minister told MPs: “I welcome the Met’s decision to conduct its own investigation because I believe this will help to give the public the clarity it needs and help to draw a line under matters.”

Justice Secretary Dominic Raab said it’s “quite right” that Ms Gray and the Met Police are investigating alleged events in Downing Street and Whitehall for potential breaches of coronavirus regulations.

The latest reports that Ms Gray has received pictures of the prime minister attending events in Downing Street where alcohol was present come less than 24 hours after Number 10 admitted the prime minister had a birthday celebration there during the first COVID lockdown in 2020.

The PM is under pressure following a raft of disclosures surrounding gatherings in Downing Street and a number of government departments during COVID restrictions.

Calls for PM to resign grow

Opposition parties have called on him to resign, with some of his own backbench MPs also demanding Mr Johnson go.

Speaking to reporters on Tuesday evening, Labour leader Sir Keir Starmer said cabinet ministers “need to look themselves in the mirror and ask themselves why they’re still supporting this PM” following the announcement of a Met police probe into Downing Street parties.

Calling for the Gray report to be published “in full”, he continued: “It’s time that some of those cabinet members spoke out and said we’re not tolerating this any longer.”