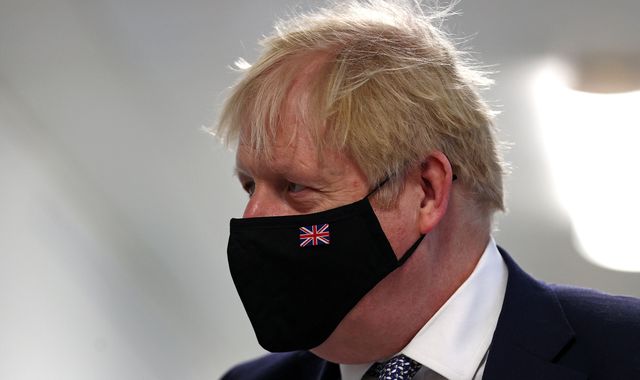 Boris Johnson is meeting his cabinet amid the growing threat of war with President Putin in eastern Europe and more humiliating Downing Street party allegations at home.

After a lengthy council of war with President Biden and other European leaders, the prime minister is expected to step up diplomatic efforts to prevent a Russian invasion of Ukraine.

But he is facing more calls to quit from Opposition leaders after new allegations that he attended a party in the Cabinet Room in 10 Downing Street on his 56th birthday in June 2020.

It is reported that about 30 guests sang Happy Birthday and ate Union Jack cake in the Cabinet Room before the PM was due to chair a COVID strategy meeting to discuss the route out of lockdown.

Besides Ukraine, the regular Tuesday cabinet meeting will also include discussions on the growing cost of living crisis and could also hear calls to scrap the National Insurance hike to pay for the NHS and social care.

At the same time, ahead of Sue Gray’s “partygate” report, the PM is facing a renewed backbench mutiny and has also been forced to concede an inquiry into claims that a junior minister, Nusrat Ghani, was sacked because she is Muslim.

Mr Johnson’s emergency talks with world leaders on the Ukraine crisis, held in a virtual meeting, ended in an agreement to take all steps to prevent a Russian invasion and implement tough sanctions if an invasion goes ahead.

“The leaders agreed on the importance of international unity in the face of growing Russian hostility,” Downing Street said after the talks. “The prime minister underlined the real human cost of any Russian aggression and the need to take all steps within our power to prevent that outcome.

“The leaders agreed that, should a further Russian incursion into Ukraine happen, allies must enact swift retributive responses including an unprecedented package of sanctions. They resolved to continue coordinating closely on any such response.”

The latest allegations of partying inside 10 Downing Street arose from gatherings on Mr Johnson’s 56th birthday on 19 June 2020. After a surprise birthday party in the Cabinet Room, it is claimed that in the evening family friends were hosted upstairs in the PM’s flat, also breaking lockdown rules.

These allegations are particularly embarrassing for the prime minister because in March 2020 – three months before his birthday in 2020 – Mr Johnson wrote to a seven-year-old girl, Josephine from Hampshire, after she told him she had postponed her birthday party.

“Josephine sets a fine example to us all by postponing her birthday party until we have sent coronavirus packing,” the PM tweeted. And he concluded his tweet with the hashtag #BeLikeJosephine.

In a further blow to the embattled PM, barrister and lockdown law expert Adam Wagner said it appeared that the Cabinet Room gathering was a party and would have been against the rules at the time.

“If this was a purely social event (which the cake and M&S food strongly suggest it was) then it can’t have fallen within any of the list of exceptions to the strict gatherings rules,” he said. “So everyone attending would have been liable for a £100 fixed penalty notice or prosecution.”

‘They have gone slightly over the top’

But responding to the allegations, first made by ITV News, cabinet loyalist George Eustice admitted some of the recent partying allegations were more serious than the latest claims.

“My understanding is the prime minister had a small number of family, close family members, with him outdoors in the garden to celebrate his birthday,” he said.

Read more:
When is the partygate report due?
Who is party investigator Sue Gray?

“I do trust what I am told on these things and I do think that in this saga there have been some quite serious allegations made. Those have been investigated.

“I don’t think that these latest allegations that have been made fit into that category. I think they have gone slightly over the top.”

Downing Street says PM was there ‘less than 10 minutes’

On the gathering in the afternoon of the PM’s birthday, No 10 said: “A group of staff working in No 10 that day gathered briefly in the Cabinet Room after a meeting to wish the prime minister a happy birthday. He was there for less than 10 minutes.”

But on claims about the PM’s family upstairs in his flat in the evening, No 10 insisted: “This is totally untrue. In line with the rules at the time, the prime minister hosted a small number of family members outside that evening.”

PM is a ‘national disgrace’

The Labour leader, Sir Keir Starmer, stepped up his demands for Mr Johnson to quit, declaring: “This is yet more evidence that we have got a prime minister who believes that the rules that he made don’t apply to him.

“And so we have a prime minister and a government who spend their whole time mopping up sleaze and deceit.

“Meanwhile millions of people are struggling to pay their bills and we cannot afford to go on with this chaotic, rudderless government. The prime minister is a national distraction and he’s got to go.”

Liberal Democrat leader Sir Ed Davey demanded a police investigation into the latest claims and said: “This can’t go on any longer.

“Party after party, lie after lie, this disgraced prime minister brings more pain every day to bereaved families who have already suffered too much.

“It is clear now the Sue Gray inquiry is not fit for purpose. The Met must investigate this to deliver justice for millions who sacrificed so much during this pandemic.

“Britain played by the rules which Boris Johnson wrote, but couldn’t be bothered to stick to himself. It is time he saved the country even more pain and resigned.”