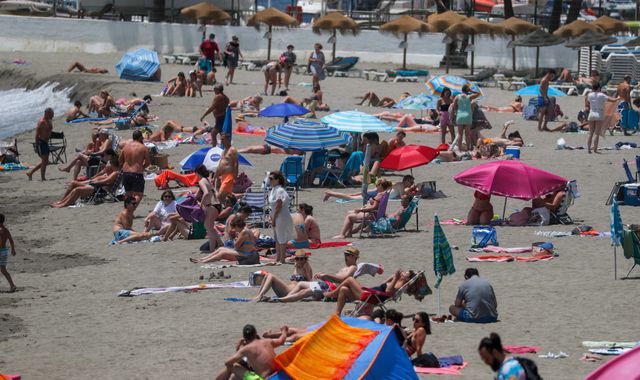 Holidaymakers have been rushing to book half-term trips after the government said COVID testing for travellers arriving in the UK would be scrapped from next month.

Airline and tour operator Jet2 said it had seen a “notable increase in demand for holidays and flights” after the announcement on Monday.

Thomas Cook said bookings were up by about a third on Tuesday on the previous day while weekly bookings this month were about four times higher than the average from last year.

It pointed to particular interest in the February half-term break while noting that for the summer Turkey had become the most popular family holiday destination.

Ryanair said it had seen a “significant uplift in bookings off the back of yesterday’s announcement”.

The changes mean that from 11 February, fully-vaccinated arrivals will no longer have to take a coronavirus test.

For those not double-jabbed, the requirement to self-isolate will be dropped.

Mr Heapy said bookings were already strong before the latest announcement but were now up 30% on last week “demonstrating just how much of a game-changer the removal of all testing is for fully vaccinated holidaymakers”.

“With international travel starting to look like it did before the pandemic, customers are jumping at the chance to book their flights and holidays,” he said.

Andrew Flintham, managing director at tour operator Tui UK, said the announcement was “a huge leap forwards in getting travel back to normal” and had already resulted in an increase in bookings.

“Many families look to go on holiday over the February half-term, so we are delighted these changes will come into effect in time,” he added.

“Going abroad will finally start to feel more normal again and without the added expense of testing.”

Mr Flintham said he expected bookings for this summer to return to pre-pandemic levels.

He told Sky News: “We need to get the tests lifted at the other end of the journey, because for most countries you might need to go to you will still need testing before you’re allowed into those countries.”

Among the destinations requiring arrivals from the UK to take a COVID-19 test, even if fully vaccinated, are Cyprus, France, Greece, Italy, Morocco, mainland Portugal, Switzerland and the US.

Spain, the UK’s most popular foreign holiday destination, does not require testing though only fully-vaccinated visitors may enter.