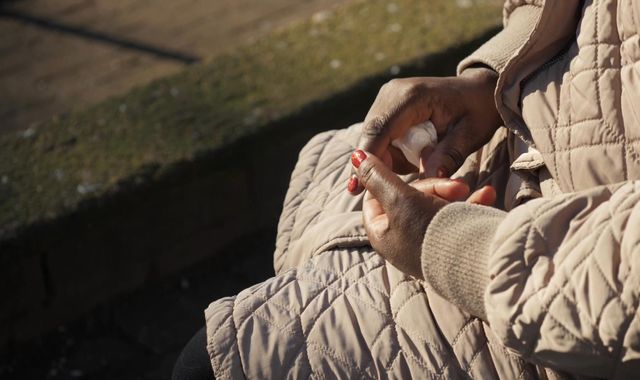 Virginia fled her country to escape her husband, who she says started abusing her after he joined a local gang, trying to force her to submit to Female Genital Mutilation (FGM).

“Life became hard because I didn’t want to undergo the cut,” she told me.

“So he started beating me hard, torturing me, cutting me with razor blades, so that I give in.”

And then, one night a group came to her house.

“That is when they forced me to have the cut. But before then they tortured me.

“They cut me with knives. I didn’t want to sit down. They punched me around just to make me sit down, and at the end of it… I sat because the pain was too much for me.”

Virginia is not her real name. After she was cut she managed to escape, but then she started receiving threats from her husband and his gang, and says her family were targeted too.

She’s afraid she will be killed if her husband tracks her down.

“They are coming for my head. I can’t go back, I really can’t go back. They are waiting for me to kill me. He will track me down.”

That’s why she’s sought asylum here in the UK, but she’s had two claims turned down. She is now appealing again.

Virginia’s story is an example of why campaigners argue asylum law needs to be more flexible, and more compassionate.

To claim asylum you have to show that you are being persecuted because of who you are. That falls into five categories under the Geneva Refugee Convention: race, religion, nationality, membership of a particular social group, or political opinion.

Gender itself is not grounds for persecution, but for those escaping gender-based violence, it can be argued that you are part of a particular social group that is being targeted.

You also need to show that your own country is unable or unwilling to help you.

Policy and advocate manager at the Joint Committee for the Welfare of Immigrants, Zoe Gardner, said: “We are a compassionate country, people hearing the stories of these people would absolutely believe that we should be able to help those people.

“The Refugee Convention grounds are extremely strict and extremely tight… and definitely too narrow. And really what we’re looking at in the future is also there’s going to be more people who are forced to move and who are displaced, who don’t fit under those grounds.

“I’m thinking in particular about climate change, and how that’s going to force people out of their homes. And there’s no provision in the Refugee Convention for climate refugees.

“So we really need to open up more pathways to legal movement for people in all different circumstances around the world.”

Does UK get more asylum claims and has Brexit made problem worse? Your questions answered

Virginia says the police where she lived were too scared of her husband’s gang to act against him.

“There seems to be a sort of myth that asylum is easy to get in this country. It’s not. It’s really hard to get.

“When you ask for asylum, you’re essentially asking for international protection because your life is at danger.

“And you’ve got to prove at the same time, that the state is unable or unwilling to help you and provide protection, and that it was probably impossible for you to internally relocate in your country. It’s a very high threshold.”

Campaigners like Zoe Gardner argue this means vulnerable women and girls could fall through the cracks.

A Home Office spokesperson told Sky News: “We take the wellbeing of asylum seekers extremely seriously and all evidence in their claims is carefully and sensitively considered against country information, which covers issues relating to female genital mutilation and domestic violence.

“Our key focus is on trying to prevent these crimes happening in the first place, including through our community engagement and international work, and co-operation with law enforcement at the border to raise awareness of gender-based crimes.”

Beneath all the legal complexities – and it will get more complicated as the government’s new Nationality and Borders Bill finishes passing through Parliament – is a scared woman, one of thousands, trapped between fear of the past, and uncertain hope for the future.