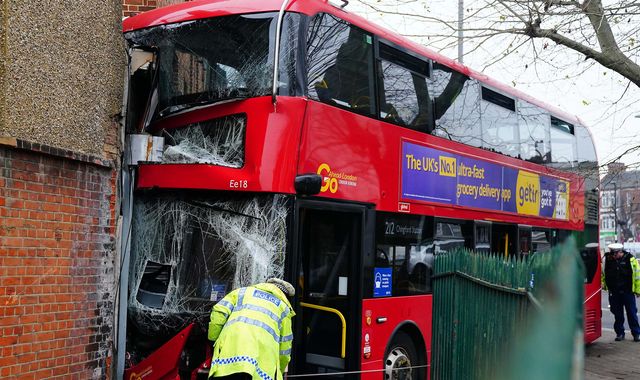 Nineteen people were “treated and assessed” at the scene after a double-decker bus crashed into a shop with flats above in east London.

The driver of the bus was trapped by his injuries and had to be freed using specialist equipment, the London Fire Brigade said.

Following the crash a London Ambulance Service spokesman said that five people were taken to hospital – including two adults and three children.

The bus collided with the building, which contains an electrical substation, at about 8.20am this morning on Selwyn Avenue in Chingford.

Ambulance crews, paramedics, a Hazardous Area Response Team and an air ambulance trauma team were sent to the scene to treat the “walking wounded”.

Highams Park School said some of its students were on the bus at the time of the crash.

“We are working closely with the emergency services and have our staff on the scene. We will inform parents of any further developments.”

A number of road closures were put in place around the junction of Selwyn Avenue and Winchester Road.

The owner of a local cafe who helped with rescue efforts said a number of schoolchildren were among the injured found “scared and crying” in the bus.

Eric Garip, 38, said: “There were a couple of kids on the floor.

“We were trying to take the kids out and they were panicking. I spoke to the driver and said to come out he said ‘I can’t, I’m stuck’.”

He added: “Some parents were in the bus as well crying.

“I tried to calm them but it was a big shock. We went upstairs and told the kids to come out but one was on the stairs so (we) were lifting them. It was very bad. They were all scared and crying.”

Mario Jahja, who runs the Greek on Broadway, opposite the crash site, said he ran outside after hearing the collision and saw children lying on the ground. He said there were lots of children on the bus.

Conservative MP for Chingford & Woodford Green Iain Duncan Smith tweeted: “Thank you to the first responders and emergency teams at the scene. My thoughts and prayers are with everyone affected. A number of people have reported suffering injuries and are being treated at the scene.”