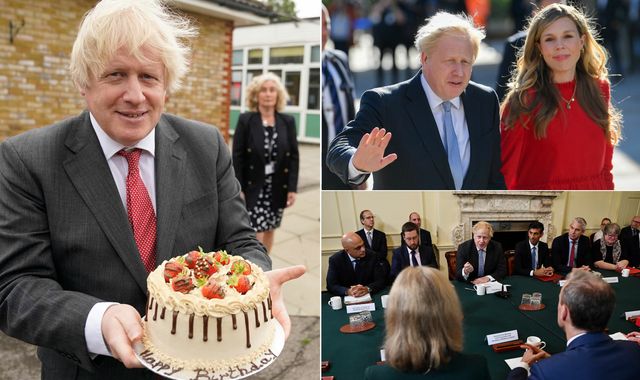 A celebration in Downing Street on Boris Johnson’s birthday involved people who were already working together, the transport secretary has told Sky News.

Speaking to Kay Burley, Grant Shapps said he did not “seek to defend” the gathering on 19 June 2020, the PM’s 56th birthday.

PM ‘didn’t organise to be given a cake’

“It obviously was the prime minister‘s birthday, he’d been given a cake earlier in the day, that’s the picture in the newspapers,” Mr Shapps said.

“And he was clearly given a cake by staff when he got back to the office.

“These are staff he would have been working with and was working with all day long, and will have been many a time in the same room with them working on the response to coronavirus.

“They come in, give him a cake, I understand I think it lasted for 10 minutes and that was it.”

Mr Shapps reiterated in the interview that “these are people that he worked with all the time” and “the prime minister clearly didn’t organise to be given a cake”.

“Some people came forward and thought it would be appropriate for his birthday.”

But he added: “I don’t seek to defend it.

“This is for Sue Gray [the civil servant leading the Cabinet Office inquiry] to decide on whether this was appropriate, she’ll make the recommendations.

“I think we can be pretty clear that the prime minister didn’t present the cake to himself.

“This is somebody coming in with that cake and I’ve explained to you that I’m furious with everybody who broke the rules.”

Labour leader Sir Keir Starmer has repeated his call for the PM to resign in the wake of the latest revelations.

The party’s shadow foreign secretary David Lammy said the rules around gatherings at the time were “clear” and this event “breaches the rules”.

Downing Street has admitted staff “gathered briefly” in the Cabinet Room on the day in question.

ITV News reported 30 people attended and shared cake, despite mixing between households indoors being banned at the time.

Its report added that Carrie Johnson, the PM’s wife, had organised the surprise get-together, which also included a rendition of Happy Birthday for Mr Johnson.

Those present are understood to have eaten picnic food from Marks & Spencer at the gathering which is said to have lasted for about 20 to 30 minutes.

Interior designer Lulu Lytle has admitted she was at the event, but said she was only there “briefly” while waiting to talk to the PM about the refurbishment of the couple’s Downing Street flat.

In response to the claim of the afternoon event, a Number 10 spokeswoman said: “A group of staff working in Number 10 that day gathered briefly in the Cabinet Room after a meeting to wish the prime minister a happy birthday.

“He was there for less than 10 minutes.”

It is the latest in a string of events that took place in Downing Street and government departments during COVID restrictions in 2020 and 2021.

Mr Johnson has admitted attending a garden party in Downing Street in May 2020, which was described by one of his aides as a “bring your own booze” event.

The revelation that officials held two parties in Downing Street the day before the Queen sat alone at Prince Philip’s funeral in April last year has also provoked fury.

The row, dubbed “partygate”, has led to calls for the PM to resign and seen some of his own MPs call for him to go.

A Cabinet Office investigation, led by senior civil servant Sue Gray, is due to report back this week.

Its findings will be pivotal in deciding if Mr Johnson faces a no confidence vote from his MPs.