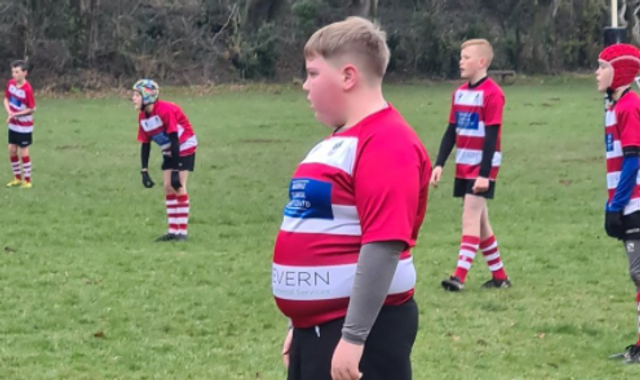 An under-12s rugby player who suffered online abuse over his size is going to one of the game’s showpiece matches after an outpouring of support from some of the biggest names in the sport.

Premiership Rugby has invited Alfie Pugsley to the Gallagher Premiership Rugby Final at Twickenham in June after rugby stars past and present rallied to his defence following trolling highlighted by his father.

A spokesperson for the governing body told Sky News: “Once we saw the story on social media at the weekend we wanted to make sure that Alfie knew he is a valued member of the rugby family.

“So we have invited him to the Gallagher Premiership Rugby Final, and we are delighted to confirm he has accepted our invitation and we can’t wait to welcome him to Twickenham on 18 June.

“We also hope he continues to enjoy playing the game.”

Alfie’s father, Mark Pugsley, brought the case to light after writing in a tweet: “Had to remove a post from Facebook as an idiot commented saying my boy is to (sic) ‘big’ to play under-12s and isn’t healthy.

“If only people knew how hard he works to get fitter and how low his confidence has been. Don’t worry Alfie I’ll always be your biggest fan.”

The message was accompanied by a picture of his son in action for Oakdale Rugby Football Club, which is around 19 miles (30km) north of Cardiff.

South African World Cup winner Tendai Mtawarira, known as ‘Beast’, was one of the famous names who told the youngster he had faced similar issues.

“People silently bullied me about my size and questioned whether I was the correct age for my age group,” he replied on Twitter.

“Keep your head high and never let the haters get to you. The game of rugby is for all.”

Aside from the Premiership Final, there may be another top-level match in store for him, as current Wales star, Louis Rees-Zammit, tweeted: “I want to see you at a Gloucester game ASAP”.

Another Welshman, one of the game’s most famous referees, Nigel Owens, told him to “keep enjoying the rugby”, promising to “come along to ref one of your games one day”.

England legend Brian Moore told the boy those trolling him are “idiots who try to make themselves feel better by running down other people”.

There was even support from leading chef Michel Roux Jr, who told him simply: “I’d have you in my team, Alfie”, to which Mark responded: “Actually [Alfie] wants to be a chef when he grows up”.

More support came from caricaturist, @tootalldrisc, who drew Alfie and adopted the picture for his profile while encouraging other people to follow suit.