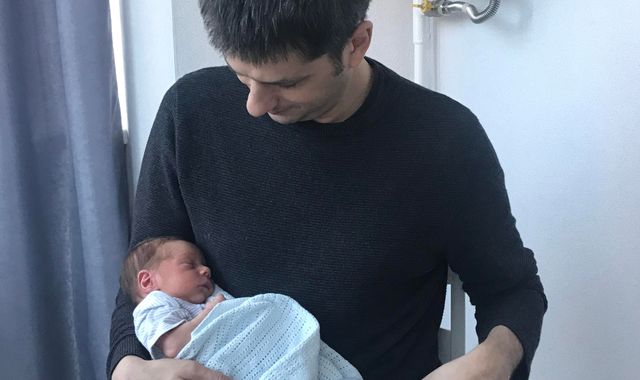 A British couple say they have a “nerve-racking” wait in Ukraine’s capital Kyiv for their surrogate-born baby to be issued with a passport, amid concerns the former Soviet state could be invaded by Russia.

Ben Garrett and his wife Alice say it is impossible for them and one-month-old Raphael to leave the country unless the child gets the travel document or is given an emergency one from the UK embassy in the city.

It comes as some staff and dependents in the embassy are being withdrawn in response to increased tensions between Ukraine and its larger neighbour.

Prime Minister Boris Johnson has said “the intelligence is pretty gloomy” and warned Russian President Vladimir Putin that an invasion would be a “disastrous step”.

Sky News understands the workers being pulled out are non-essential and the embassy remains fully operational. The US has ordered the family members of all American embassy staff to leave Ukraine.

The Garretts live in the Queen’s Park area of London but moved to Kyiv at the end of last month to meet their baby and check official paperwork.

The couple had always planned to stay in Kyiv until mid-March due to the process of getting a passport for their son.

Mr Garrett said: “We’ve always known that it would be a load of paperwork once he was born, for us to bring him home – but obviously, what was going to be a period of potential boredom, waiting in an apartment in Kyiv for two or three months, is now more nerve-racking.”

The 40-year-old added: “Unless we can get a passport for Raphael in the conventional way, or if that becomes impossible, the British embassy get to the point they can give Raphael an emergency passport, we can’t leave – so it is nerve-racking.”

Despite international worries about a possible invasion of Ukraine, Mr Garratt, who works for London North Eastern Railway, said Kyiv “feels completely normal” with no queues or panic buying.

“It’s really strange… (it’s) like Oxford Street on a Saturday… except for the snow,” he said.

“It looks normal. Looking out the window… it’s buzzing… there’s no evidence of panic buying, there’s no queues anywhere.

“I’ve never been in a country that’s been invaded, I don’t know what that feels like, but it feels bizarre that it could happen (here).”

Read more: What’s going on at the Russia-Ukraine border and where is Moscow hiding its tanks and missiles?

Meanwhile, an IT director from Glasgow has said has “no intention” of leaving his wife and son in Ukraine as he maintains “all is well”.

‘No intention of leaving my flat’

George, who has lived in the country for more than two years and only wanted his first name used, said: “If the tanks roll and they are on the streets, that will be (a) pain… (but) I have no intention of leaving the flat we bought here.”

He went on: “(The embassy) are just being cautious… we live normally in Kyiv for now.”

Share
Facebook
Twitter
Pinterest
WhatsApp
Previous articleNumber 10: Boris Johnson ‘committed’ to National Insurance tax hike in April despite pressure to scrap the move amid cost of living crisis
Next articleCOVID still ‘full of surprises, nasty and cunning’ and more variants ‘not far away’, WHO warns