Sue Gray report: Dominic Cummings says he’s only responded to questions in writing so Boris Johnson does not have ‘more chances to lie’ 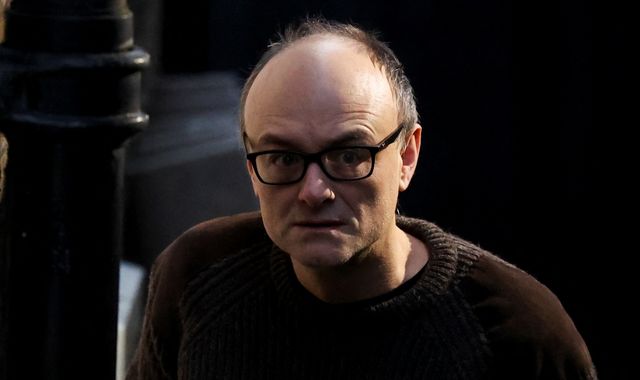 Dominic Cummings has revealed he has provided written evidence to the investigation into Downing Street parties during lockdown – and claims “other damaging stories” will emerge until Boris Johnson is out of office.

Sue Gray is looking into parties and gatherings in Number 10 and other government departments during COVID-19 restrictions in 2020 and 2021.

Mr Johnson was asked today for a comment on Downing Street scandals – but said “you’ve got to wait” for Ms Gray’s report to be published.

The Cabinet Office report is due to be released this week.

Cummings claims evidence is being kept from inquiry by fearful staff

Mr Cummings, who left Downing Street in November 2020 and has since been a fierce critic of Mr Johnson, made his latest comments on his Substack blog.

He said he told Ms Gray that he would only give evidence in writing because “if we speak the PM will invent nonsense and spin it to the media and you and I will both have problems”.

Mr Cummings said he told Ms Gray “let’s keep everything in writing” as “therefore he [the PM] cannot invent things I’ve supposedly said to you, there is only a written record, this makes both our lives easier. She agreed.”

“But I will not speak and therefore provide the PM with more chances to lie and confuse everybody.”

‘Other damaging stories will come out’

Mr Cummings also claimed that evidence was being kept from the Cabinet Office inquiry because staff are worried it would be seen by the PM.

He suggested this means that more evidence, including pictures, will keep emerging once the report is released.

“I know others are very worried about handing things to the Cabinet Office because they know the PM will see everything SG collects,” Mr Cummings said.

“This inevitably means that evidence, including photos, is not given to her and instead will keep leaking after her report. (To stress, this is a consequence of beliefs about the PM’s integrity, not SG’s.)

“Other damaging stories will come out until he is gone.”

“Many officials are desperate” to see Mr Johnson gone this week, Mr Cummings suggested, as he promised to carry out an “ask me anything” session on his blog once the report is released.

Report police have provided ‘a lot of information’ to investigation

Speaking during a visit to a hospital on Monday, Mr Johnson said people would have to “wait” for the Cabinet Office report to come out.

Mr Cummings latest comments come as an unnamed source told The Daily Telegraph that Metropolitan Police officers have provided “a lot of information” to Ms Gray.

When asked how significant this material is, they added: “Put it this way, if Boris Johnson is still prime minister by the end of the week, I’d be very surprised.”

Mr Johnson has said he will make the findings of the Cabinet Office investigation public and also make a statement to MPs.

It could be up to PM what is made public

Speaking on Monday, the PM’s spokesman suggested it could be up to Mr Johnson what exactly is released into the public domain.

He said: “It’s very much our intention to publish the findings in full as set out in the terms of reference.”

But asked if Ms Gray could request that the report be published in its entirety – even if the PM disagreed – the spokesman said: “I think it is a report that comes to the prime minister.”

If it is critical of the PM, it will increase the pressure on him and could spark a vote of no confidence in his leadership if enough Conservative MPs demand a ballot.

Under party rules, once the total number of letters reaches 54 – 15% of Tory MPs – the 1922 Committee must call a vote of confidence in the leader.

Share
Facebook
Twitter
Pinterest
WhatsApp
Previous articleCOVID-19 tests for fully vaccinated travellers arriving in England to be scrapped
Next articleMaida Vale: Woman stabbed to death and man killed after being hit by car in in west London street