Maida Vale: Woman stabbed to death and man killed after being hit by car in in west London street 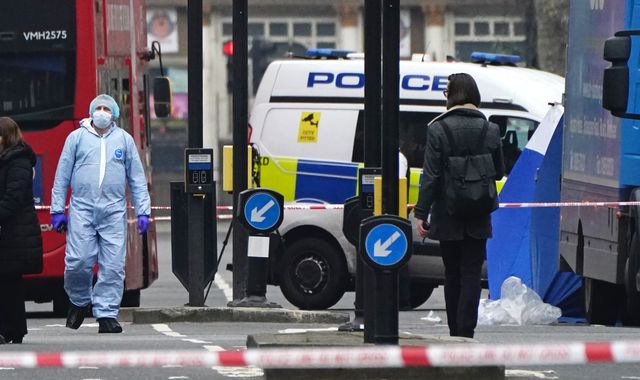 A woman has been stabbed to death and a man killed by a car after a struggle apparently ended up in the road.

One witness said the woman was being attacked by the man and the confrontation moved into the road, where they were both hit by a car.

It happened in Chippenham Road in Maida Vale, west London, at about 9am.

The force said it is not looking for anyone else in connection with the incident.

Firefighters managed to free the man from underneath the car, but despite the efforts of paramedics, both people were declared dead at the scene.

Witness Mulugeta Asseratte told PA news agency: “It is a very terrible incident. I was coming up from the bakery to Chippenham Road and suddenly heard shouts of ‘stop it, stop it’ and it was a girl being attacked by a gentleman.

“In any case, I’m a father of four daughters, such things do happen, and I tried to look and even say ‘stop it’ and it would not.

“All of a sudden it moved to the street and no sooner than they reached the street than a driver came and hit both of them.

“We were all shocked and shouting and my heart goes out to the families of this fatal incident.

“This is something one sees in movies, not in real life.”

Detective Chief Inspector Jim Eastwood, of the Met’s Specialist Crime Command, added: “This was a terrible incident that occurred in broad daylight on a busy London street.

“It also appears that a number of members of the public bravely tried to intervene to stop the attack.”

Anyone who saw what happened or has relevant information is asked to contact police on 101 quoting the reference 1496/24jan, or to stay anonymous contact Crimestoppers on 0800 555111 or online.