COVID-19: As UK restrictions lift, what challenges do we face before the ‘end’ of the pandemic – and when could that be? 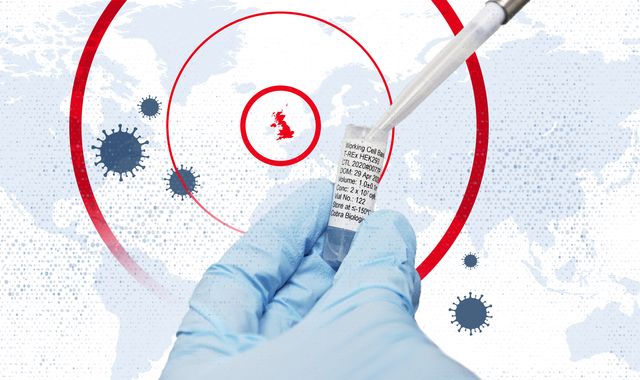 The World Health Organisation has criticised political leaders for comparing coronavirus to flu again and stressed it is still “full of very nasty surprises” despite restrictions lifting in the UK.

Announcing the scrapping of Plan B measures in England last week, Health Secretary Sajid Javid said that with “Omicron in retreat” we “must learn to live with COVID” as it could be “with us forever”.

But Dr David Nabarro, WHO special envoy on COVID-19, warned that “governments everywhere should not suggest the data has suddenly changed, or the virus got incredibly weak”.

Follow live coronavirus updates from the UK and around the world

He suggested that although the end of the pandemic “is in sight”, Europe is only “passing the halfway mark in a marathon” with a “long, long way to trudge”.

Here Sky News speaks to scientists about what challenges lie between the UK removing COVID measures and the global pandemic being declared officially over.

Approaching end of Omicron – but not COVID

At the start of January, the number of Omicron cases in the UK peaked at nearly 200,000 a day but have been falling considerably since then.

Although such high levels of infection in December and good uptake of booster jabs mean most of the population have a higher level of immunity against Omicron, new variants are still likely to emerge.

Professor Andrew Preston, of the University of Bath’s biology and biochemistry department, told Sky News that seemingly the main factor driving the government’s decisions on COVID is the “long-term trajectory of the variant we have at the moment”.

But he warns: “We have seen that COVID can significantly change its behaviour – first with the Alpha variant, then Delta and now with Omicron.

“We’re approaching a point in the UK where Omicron is in a steady state.

“But there’s nothing to say that there won’t be another variant in the future that will be more virulent.”

Professor Lawrence Young, an expert in molecular oncology at the University of Warwick, also stressed the “big ongoing threat of new variants”.

He said: “The longer the virus is allowed to spread in populations that aren’t completely vaccinated, the more likely it is to mutate.

“We avoid that endless cycle of new variants by helping the global effort on vaccination, but also maintaining surveillance (testing) capacity.”

No guarantee next variant will be milder

With some other viruses there is evidence that in order to survive, new variants must become less severe.

Professor Preston explains that viruses like COVID which only live in humans are “dependent on having live humans around”.

Therefore, if the virus is so severe that it “kills its hosts at high frequency… the number of available hosts will start to dwindle and if this continues it will die out”.

He explains: “In this case, a variant that is able to transmit to a new host without killing it will be fitter – as it will maintain the supply of hosts and therefore its niche on the planet.”

This means that future COVID variants may continue to be milder, like Omicron.

But he warns: “This isn’t necessarily a given, and the opposite can be true.”

Professor Young gives the examples of measles, malaria and Ebola, none of which have become “any easier to deal with” over time.

“They are no less aggressive or pathogenic than they were – they’re still very dangerous diseases.”

The latest UK Health Security Agency (UKHSA) data suggests that vaccine effectiveness against hospitalisation from Omicron reduces to only 52% after six months with only two doses.

But with a third jab that increases again to 88%.

However, with the NHS still under huge pressures from Omicron staff absences and backlogs from two years of COVID delays, it is unlikely to be able vaccinate people at such a frequent rate.

“Waning immunity of our current vaccine is another concerning thing,” Professor Young says.

“The whole population can’t be vaccinated every six months or a year.”

He adds that reduced vaccine efficacy is particularly an issue in schools, where millions of five to 11-year-olds are unvaccinated and able to spread the virus easily.

“We could end up in an endless cycle of children infecting adults with waning immunity,” he says.

“The hope is that with current vaccines and the high levels of Omicron we’ve seen people are double-protected.”

Scientists are also working on improved vaccines with built-in protection against new variants, he adds.

Removing testing and self-isolation will leave us ‘blind’

In response to reports lateral flow tests will soon no longer be free and widely available, the government has said they will be for “as long as necessary”.

Prime Minister Boris Johnson has said that he wants to remove the legal requirement to self-isolate if you have COVID by 24 March – if not earlier.

Professor Preston suggests that delaying this until the Easter school holidays – or when the weather has improved so there is less indoor mixing – would be better.

And on testing, Professor Young warns: “Removing testing will mean you don’t know where the virus is and how it’s spreading.

“Then you are completely blind to outbreaks, and particularly with those who are higher-risk, not having targeted testing is very worrying.”

Modellers at the University of Warwick have also predicted an ‘exit wave’ of between 1,000 and 2,000 Omicron cases a day at some point this summer once restrictions lift.

Professor Young adds: “It’s going to be very likely that we see a rebound of Omicron.

“It’s very, very infectious, so it’s hard to see how we wouldn’t get huge levels of infection again.”

The emergence of the BA.2 sub-lineage of Omicron as a ‘variant under investigation’ also “reiterates the importance of testing to monitor the arrival of new variants”, he adds.

Over the course of the pandemic, some scientists and politicians have caused controversy by putting their weight behind the concept of so-called ‘herd immunity’.

This is when so much of the population has developed immunity to the virus by being infected that there are not enough left for it to keep reproducing – causing it to eventually peter out.

But although the UK has seen such high levels of Omicron cases over the past two months – recent ONS data suggests Omicron is 16 times more likely to reinfect people who have already had it than Delta was.

This means, Professor Preston says, that the “traditional concept of herd immunity doesn’t apply” with Omicron.

He also stresses that herd immunity strategies do not protect the clinically vulnerable – as they cannot risk becoming infected.

“We need to be empathetic and recognise that while for most of us, there’s no more we can do to avoid COVID, for some people the anxiety and risk of getting it is much, much higher.

“It will be them paying the price for our return to normalcy.”

He adds that the NHS may be able to facilitate annual boosters for the immunocompromised “for a few years” – but they would not offer “100% protection”.

“We don’t know how long that protection would last for the super-vulnerable,” he says.

Globally end of pandemic could take ‘a few years’

WHO has repeatedly said that the pandemic will continue as long as the significant parts of the planet are unvaccinated.

Professor Young adds that we need to “learn from past experiences” and that despite the government promising last July would be the removal of the last set of restrictions – they had to be reimposed just months later.

“Where we have a raging pandemic elsewhere, we can never say we’re completely out of it – we’re not a moated castle,” he says.

Professor Preston says that “over the next few years” different countries will experience COVID at differing levels.

“If Omicron does spread worldwide, then we will reach a point where everyone has had it and there are a steady number of cases through reinfections,” he says.

“But it might take quite a few years to reach that state.”

He adds that while WHO could decide to declare the pandemic over if most countries opt for “living with COVID” strategies as the UK has – the virus will still be there.

“It’d be about getting it out of our national psyches – and the focus no longer being on it – but that wouldn’t mean there would be no COVID anymore.”