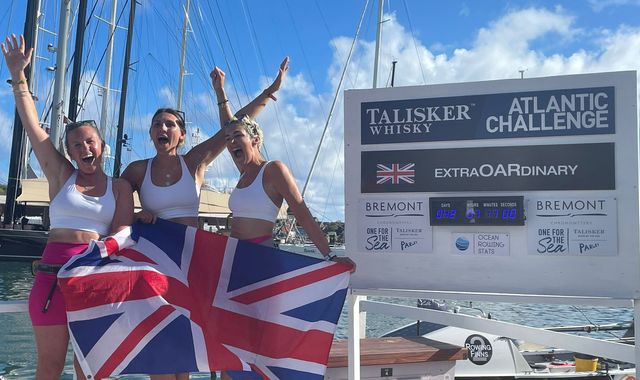 Three British women, one of whom has incurable cervical cancer, have shattered the world record for rowing across the Atlantic.

The women completed the 3,000-mile crossing from La Gomera in the Canary Islands to English Harbour in the Caribbean in 42 days, seven hours and 17 minutes, knocking seven days off the female trio record in the Talisker Whisky Atlantic Challenge.

They were given an emotional dockside welcome by family and friends who had flown out to celebrate with them.

As they stepped on to land for the first time since 12 December, they said they felt “wobbly, overwhelmed and happy”.

It is thought Ms Cordiner is the first person to tackle this challenge as a cancer patient.

They had to contend with scorching heat, huge waves and sharks

Ms Cordiner, 42; Ms Irving, 31, and Ms Johnston, 32, were on a 25ft boat – called Dolly Parton – rowing two hours on and two hours off continuously and unsupported.

When they set off, Camilla, Duchess of Cornwall, sent them a hand-written good luck message wishing them “fair winds and following seas”.

During their trip they had to contend with scorching heat, huge waves, sleep deprivation, blisters and callouses on their hands and sharks.

As they arrived, the waiting crowds were told: “If you followed their social media, these ladies made rowing the Atlantic look like one big party at Club Dolly Parton with karaoke, Hawaiian shirts, face glitter and glow sticks.”

Ms Cordiner was diagnosed with cervical cancer in March 2019, completely by chance as she was having her eggs harvested in the hope of having a baby in the future.

She underwent a radical hysterectomy but doctors left her ovaries as she wanted to do another round of egg-freezing. Once her eggs were harvested, she had her ovaries removed.

After the surgery, all seemed well. But in June 2020, she began experiencing stomach pains and knew instantly the cancer was back.

Ms Cordiner worried that going back into treatment would scupper the crew’s chances of taking part in the Atlantic row.

But there was a further blow – despite training through chemotherapy, doctors found a growth on her heart and told her to stop exercising immediately.

Her medical team treated the cancer first and then operated on her heart to remove the tumour.

The 42-year-old is now in remission and only taking drugs to deal with the effects of being plunged into an early menopause.

She said: “The doctors have told me I don’t have decades, I have years, so I really want to make the most of them. I don’t want to muck around doing stuff that doesn’t matter – I want to do things that are challenging and fun.

“I don’t know how long I’ll be in remission. A lot of people think cancer/chemo/death. But today the drugs are so much better – you can live your life with cancer. People live for years on treatment.”

To donate to Cancer Research UK, Macmillan Cancer Support and the Royal Marsden Cancer Charity, head to the We Are ExtraOARdinary Go Fund Me page.

Share
Facebook
Twitter
Pinterest
WhatsApp
Previous articleNusrat Ghani: Boris Johnson says he is taking MP’s claim she was sacked as a minister due to her Muslim faith ‘extremely seriously’
Next articleCOVID-19 tests for fully vaccinated travellers arriving in England to be scrapped, PM confirms