Baroness Warsi: Nusrat Ghani’s claim she was sacked as a minister due to her Muslim faith ‘disturbing’, says Conservative peer 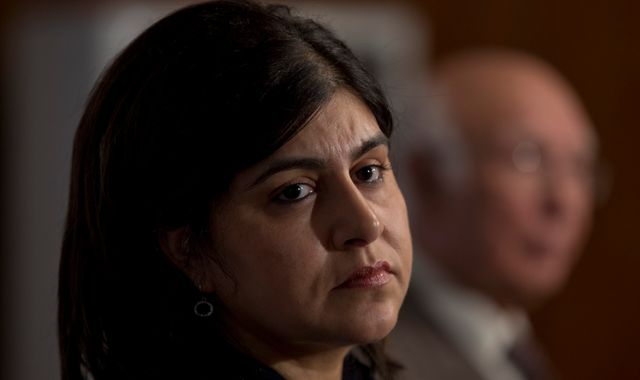 An MP’s claim that she was sacked as a minister because of her Muslim faith is “disturbing”, the former co-chair of the Conservative Party has said.

Baroness Warsi, who was also a former Conservative minister, told Sky News it sends “a shiver” down the spines of British Muslims to know “that this is the kind of thing that could be happening at the heart of government”.

At the weekend, Conservative MP Nusrat Ghani said she was told by a whip, who she did not identify, that her “Muslimness was raised as an issue” at a meeting in Downing Street.

Ms Ghani was sacked as transport minister in a February 2020 reshuffle.

On Monday morning, Prime Minister Boris Johnson announced a Cabinet Office inquiry into the matter and said he takes the matter “extremely seriously”.

The prime minister told reporters: “We take these allegations extremely seriously, I took them very seriously when they were raised with me 18 months ago… very glad there’s an investigation taking place now.

Speaking to Sky News’ political editor Beth Rigby, Baroness Warsi welcomed the PM’s announcement of an inquiry but said she hopes “a culture change comes off the back of it”.

“One, because what has happened to Nus Ghani is an open secret in Westminster – me and many, many colleagues have been aware of this for many months and the way that she has struggled to be heard.

“But secondly, because the pattern in Nus’ case is very similar to what I have seen in hundreds and hundreds of other complaints that have been made to the party about Islamophobia.

Analysis: MPs fear PM will not be able to survive scandals as Ghani’s claims expose instability in No 10

“And the pattern is this – that the issue of Islamophobia is seen as far less serious than other forms of bigotry, that when the issue is raised that the response is quite aggressive and colleagues feel threatened and ostracised and feel like it will be a career ending issue.

“They always push this into bureaucracy and the onus is put back on the complainant and the victim rather than those who are told about this dealing with the matter proactively – and no action is usually taken until the media shine a spotlight on it.

“But the government acts in the interests of all its citizens and there are nearly four million British Muslims in this country who are looking at government right now and thinking ‘is it possible for a minister to lose her job simply because of her Muslimness?’

“And it sends a shiver down their spine to think that this is the kind of thing that could be happening at the heart of government.”

In the immediate aftermath of Ms Ghani’s comments, chief whip Mark Spencer said he was the whip in question.

He described her allegations as “completely false”, adding: “I consider them to be defamatory. I have never used those words attributed to me.”

Asked if Mr Spencer could stay in his role while the inquiry is carried out, the PM said: “This is something I take personally extremely seriously, I took it very seriously 18 months ago, we must wait and see what the investigation produces.”

Ms Ghani has also claimed that when she raised the matter directly with the PM, he told her he could not get involved.

“At the time these allegations were first made, the prime minister recommended to her that she make a formal complaint to CCHQ. She did not take up this offer,” a Number 10 spokesperson said.

“The prime minister has now asked officials to establish the facts about what happened.

“As he said at the time, the prime minister takes these claims very seriously.”

Responding to the launch of an investigation, Ms Ghani said she welcomed the news.

“The terms of reference of the inquiry must include all that was said in Downing Street and by the whip,” she wrote on Twitter.

“I look forward to seeing the terms of reference.”

Share
Facebook
Twitter
Pinterest
WhatsApp
Previous articleCOVID-19: As UK restrictions lift, what challenges do we face before the ‘end’ of the pandemic – and when could that be?
Next articleFGM victim applies for UK asylum for third time as she fears for her life if found by husband