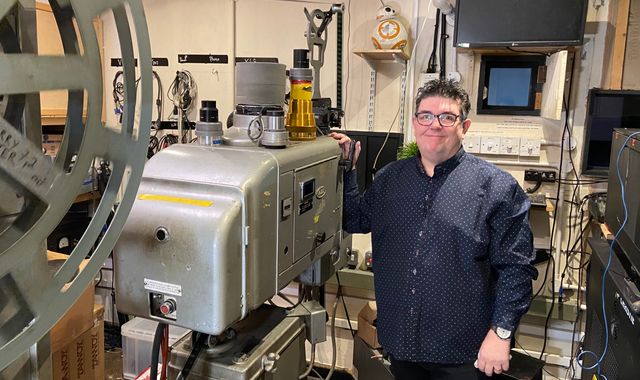 The owner of the UK’s oldest cinema says the pandemic has created “the biggest existential crisis” ever faced by the industry.

The Electric in Birmingham dates back to 1909 but enforced closure at the start of the pandemic led to it remaining shut for almost 22 months before finally reopening to the public this week.

It was taken over last year by Kevin Markwick, who also owns The Uckfield Picture House in East Sussex. He’s worked in the industry for his whole life and has never feared for the future of cinema like he has over the past two years.

“This has been the biggest existential crisis we’ve ever faced,” he says.

“Not only were we obviously financially strapped all the way through because no money was coming in, but you’ve still got to pay all the outgoings the film distributors rather went with indecent haste to home entertainment, streaming and things like that so it wasn’t entirely clear that we would have a steady supply of films when we came back.”

When Universal’s Trolls World Tour went straight to streaming in April 2020 it was the first major studio film to skip its planned cinema release.

With cinemas closed, the industry was crippled. Before the pandemic in 2019 UK box office revenue exceeded £1.25bn. In 2020 it plummeted to just under £300m.

Delays to the release dates of big blockbusters added to the industry’s woes.

When the latest Bond film, No Time to Die, was eventually released last year it was the first sign of a revival. Spider-Man: No Way Home has also proved popular at the box office.

In 2021 UK box office revenue rose slightly to over £556m, an encouraging sign in a year when cinemas were closed for several months of lockdown, but still well short of pre-pandemic revenue.

Roger Shannon, a visiting professor of British Cinema Histories at Birmingham City University, believes the industry can be optimistic about the future, despite changes in the way people enjoy films.

“I think the pandemic has accelerated that technological change and streamers have become more prominent,” he says.

“Of course we’re all watching movies from our sofas… but I don’t think it’s an either-or situation.

“Streamers are really revitalising, recalibrating and reinvesting into the studio infrastructure in the UK, which I think augers well for the long-term.

“I think cinema numbers will recover because I think that the appetite for cinema hasn’t gone away and I think cinema will rebound with incredibly new ways of telling stories and I think the technological revolution means the stories will be told in different ways.”

“It’s a completely different experience,” he says. “It doesn’t matter how big your TV is – you still need to get out of the house from time to time.”

His daughter Katie, who is the cinema’s manager, doesn’t think streaming poses the threat others view it as.

“It’s probably not even a case of competing I don’t think to be honest because I think we can both exist in the same world,” she says.

But she accepts that in order to thrive in 2022, they’re in the hands of the filmmakers.

“We need the films that were supposed to come out in 2020 to actually finally come out,” she says.

Taking over such an iconic cinema brings with it the responsibility of continuing over a century of success. But so far the signs are good. Interest in the reopening of the cinema has exceeded her expectations.

“Everyone’s really excited with the phone ringing off the hook with everyone saying ‘when are you open? When can I come back?’ I think people are looking forward to it,” she says.