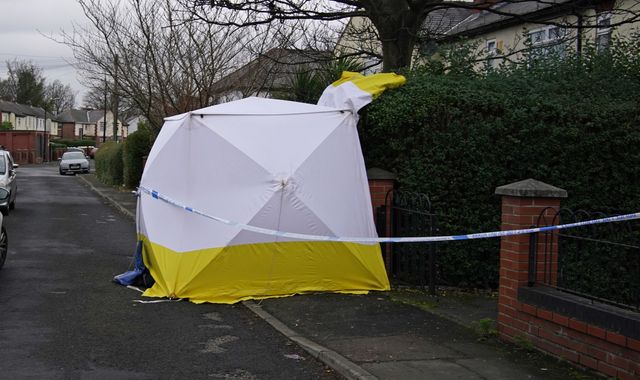 Police have launched a murder investigation following the death of a 16-year-old boy who was found with stab wounds in Manchester.

Emergency services were called to Thirlmere Avenue in Stretford, a town about four miles southwest of the city, at about 7pm on Saturday.

The boy was taken to hospital after being treated by paramedics at the scene, but later died of his injuries, Greater Manchester Police said.

Four teenagers – all boys aged between 15 and 17 – have been arrested on suspicion of murder in connection with the inquiry.

Superintendent John Harris said: “A family has been left devastated by this tragic news and our thoughts go out to them at this most shocking and upsetting time.

“Specially trained officers will be there to support the boys’ loved ones, and extra patrols will remain in the area of this fatal attack so that the local community can speak to us about any concerns or information they may have.”

Superintendent Harris said detectives were in the “early stages” of the investigation and would be “following up a number of different lines of inquiry we have to ensure those responsible are brought to justice”.

Alternatively, details can be passed anonymously to the independent charity Crimestoppers by calling 0800 555 111.

Share
Facebook
Twitter
Pinterest
WhatsApp
Previous articleBoris Johnson met Nusrat Ghani in 2020 over her claim she was sacked over her ‘Muslimness’
Next articleThe Apprentice: Claims of bullying on BBC One show are ‘unsubstantiated’, spokesperson says