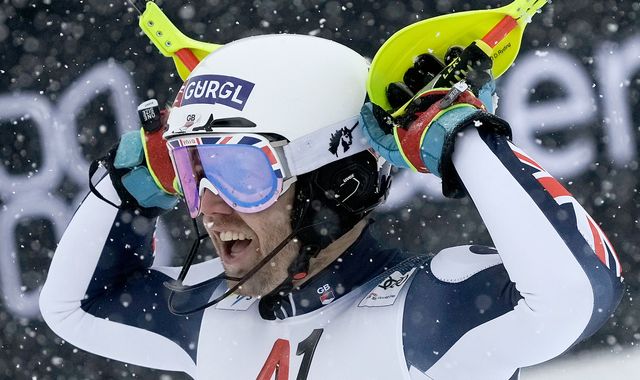 The 35-year-old beat off competition from Norwegian duo Lucas Braathen and Henrik Kristoffersen to take first place in the Kitzbuhel Slalom.

His, and Great Britain’s, previous best finish at the event was second in 2017.

But Ryding won gold after a stunning second run in under 50 seconds.

“I’ve gone blank,” he said right after the race.

Analysis: Beijing Winter Olympics: Athletes could pay a heavy price for speaking out

“There was so much emotion when I finished and now I just, I don’t know what to say, I’m normally not lost for words but now.

“You know, I’m 35 now but I never stopped believing, I never stopped trying, and to bring the first victory for Great Britain in a World Cup, in Kitzbuhel, I mean, I don’t know if dreams are made better.

“Thanks for your support, it means the world just to hear some Brits and people cheering in the fans because you know, I don’t have a home race but there’s always some Brits in the Alps because we love skiing and we love to party as well, so, thank you.”

Ryding has represented Team GB in three Winter Olympics and will be captaining the team at his fourth Games on 4 February.

He was named in the squad for the Beijing Games on Friday and will be hoping to continue with momentum from Austria to China.

Ryding started skiing on dry slopes in Pendle, Lancashire, at the age of eight but didn’t reach the world’s top table until the age of 28.

Speaking to Team GB in November, he said: “Coming to the top later means my motivation is still right up there.

“I trained my whole life to get into the top 30 in the world and now I’m there, so why not carry on. I’ve learned how to be committed and now it’s a way of life.

“I get up some mornings and can’t be arsed to go to the gym – but I just roll out of the door and I never miss a session.

“In my twenties, I didn’t go out partying. I’ve always done my training and I think that does pay off in later life. I’m doing better numbers in the gym and running than I’ve ever done.”