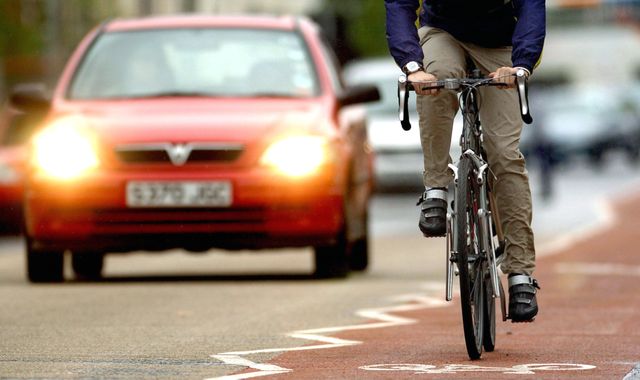 A revised Highway Code comes into force this week that gives cyclists clear priority over drivers – with motorists given specific instructions on how much room to allow when overtaking.

The new list of advice and rules for people on Britain’s roads will be updated from 29 January, pending parliamentary approval, and will introduce a risk-based hierarchy of road users.

But while the changes have been welcomed by cycling campaigners, the government has been accused of being “far too silent” in communicating them.

The new rules mean cars must leave at least 1.5 metres room when passing bicycles – and revised guidance also says “it can be safer” for cyclists to ride two abreast.

Cyclists are also now instructed to ride in the centre of the lane in slower moving traffic, “on quiet roads or streets, moving over to the left if a faster vehicle comes up behind them, but only if they can do so safely” and “at the approach to junctions or where the road narrows, where it would be unsafe for drivers to overtake them”.

Other key amendments include drivers turning into a road being required to give way to pedestrians waiting to cross.

They are also now told not to cut across cyclists or horse riders going straight ahead when turning into or out of a junction or changing direction or lane, to avoid “left hook” collisions – and allow cyclists priority at roundabouts.

Another recommendation is for car users to reduce the risk of opening a door into the path of a cyclist by using the hand on the opposite side to the door, as that will often lead to them looking over their shoulder.

This is known as the Dutch Reach technique.

Provisional Department for Transport (DfT) figures show 4,290 pedestrians and 4,700 cyclists were killed or seriously injured in crashes on Britain’s roads in the year to the end of June 2021.

But with just days before they come into force, a survey indicates one in three drivers are unaware of the major changes aimed at protecting cyclists and pedestrians.

A third of motorists (33%) polled for the AA said they did not know the Highway Code was being revamped, including 4% who had “no intention” of looking at the details.

More than 13,700 drivers were questioned between 8 and 18 January for the survey.

AA head of roads policy Jack Cousens said: “While the government formally announced these changes last summer, they have been far too silent in promoting them.”

Duncan Dollimore, Cycling UK’s head of campaigns, told Sky News: “The changes to the Highway Code will happen overnight, so it is frustrating official communications come only after their introduction.

“That helps no one – neither the walkers and cyclists the rules are meant to protect, nor the drivers who are somehow meant to telepathically know about them.

“These are fundamental changes about the way we use our roads, it’s essential we have a long-term well-funded public awareness campaign to make that change happen.”

A DfT spokesman insisted the changes “were announced to national press”.

However, the department’s website and social media accounts of the government’s Think! road safety campaign have not yet mentioned the changes.

The rule change comes as it was revealed Olympic cycling gold medallist, Chris Boardman, will lead a new government agency tasked with improving cycling and walking infrastructure in England.

The athlete has been appointed interim commissioner of Active Travel England (ATE), which is responsible for awarding funding to projects that improve health and air quality.

The agency, based in York, is also tasked with identifying dangers for vulnerable road users.

The government has announced it has invested £5.5m in cycling and walking schemes, including £3m to boost infrastructure around railway stations.

And £2.2m will be spent on exploring active travel being prescribed on the NHS.