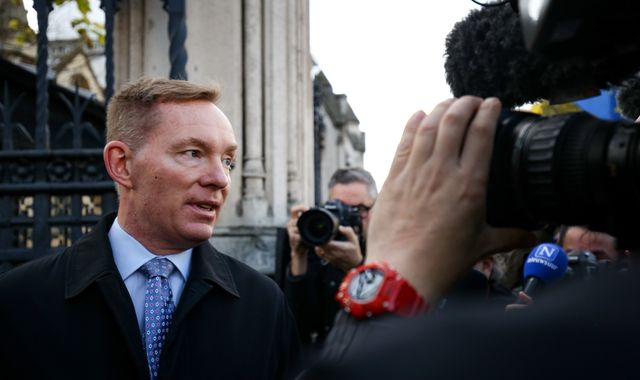 Attempts to pressure Tory MPs trying to topple Boris Johnson are illegal, the head of a Westminster sleaze watchdog has argued.

Labour MP Chris Bryant, who is chairman of the Commons Standards Committee, said alleged threats to pull public funding from members’ constituencies amounted to “misconduct in public office” and should be reported to the police.

He also referred to claims that Boris Johnson himself had been directly involved.

The embattled prime minister is fighting for his political life ahead of a critical report into lockdown parties in Downing Street, including one he attended in May 2020.

Mr Bryant’s comments came after William Wragg, the senior Tory MP who first raised concerns about attempted “blackmail” by Downing Street, revealed he was to meet police about his allegations.

MPs should operate ‘without fear or favour’

Mr Bryant said he had spoken to “about a dozen” Conservatives in recent days who had either been threatened by government whips with having cash cut from their constituencies or promised funding if they voted ‘the right way’.

“I have even heard MPs alleging that the prime minister himself has been doing this,” Mr Bryant told the BBC.

“What I have said to all of those people is that I think that is misconduct in public office. The people who should be dealing with such allegations are the police.

“We are not the United States. We don’t run a ‘pork barrel’ system. It is illegal.

“We are meant to operate as MPs without fear or favour.

“The allocation of taxpayer funding to constituencies should be according to need, not according to the need to keep the prime minister in his job.”

Meanwhile, ahead of his meeting with Scotland Yard next week, Mr Wragg, told The Daily Telegraph that he would outline “several” examples of bullying and intimidation, in some cases involving public money.

The member for Hazel Grove, one of seven Tory MPs to have called publicly for Mr Johnson to quit, said: “I stand by what I have said.

“No amount of gas-lighting will change that.

“The offer of Number 10 to investigate is kind but I shall leave it to the experts. I am meeting the police early next week.”

A Metropolitan Police spokesman said: “As with any such allegations, should a criminal offence be reported to the Met, it would be considered.”

Bury South MP Christian Wakeford, who this week defected to Labour, has described how Tory whips had warned him over funding for a new school in his constituency if he rebelled in a vote over free school meals.

Ministers have sought to dismiss the claims, insisting the whips had no role in the allocation of public funding.

While his defection appeared to have put the plotting on hold, the publication of the report by Sue Gray, the senior civil servant investigating lockdown parties in Number 10 and elsewhere in Whitehall, poses renewed danger to the PM.

It could trigger a fresh wave of no confidence letters to the chairman of the Tory backbench 1922 Committee Sir Graham Brady – 54 of which are needed to trigger a vote on Mr Johnson’s leadership.

Davidson would submit no confidence letter

The PM is expected to spend the weekend at Chequers, his official country residence, seeking to assuage potential rebels.

However, he has been dealt a further blow after former Scottish Conservative leader Ruth Davidson branded him “unfit for office”.

Baroness Davidson, who was a vocal opponent of Mr Johnson’s Tory leadership bid as well as Brexit, told The Times if she was an MP, she would submit a letter of no confidence.

Share
Facebook
Twitter
Pinterest
WhatsApp
Previous articleImage released of man wanted in connection with series of sex attacks on young girls in Greenwich
Next articleGirlfriend of British scientist killed by stray bullet describes his final moments: ‘I held him while we waited for the ambulance’