Whip threatened to pull funding for link road around Bath for rebelling on Brexit, ex-MP claims 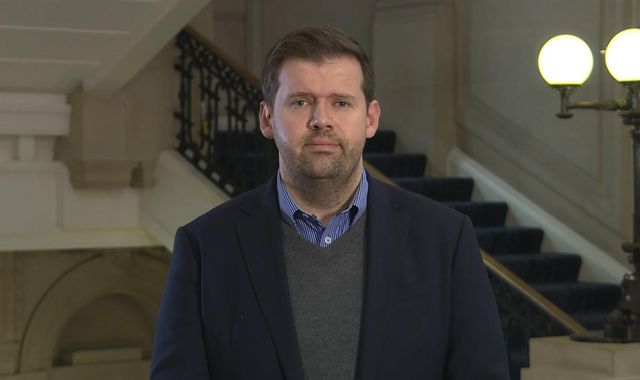 A former Conservative MP said a government whip threatened to pull funding for a major link road around Bath if he rebelled against a Brexit vote.

Ben Howlett, MP for Bath from 2015-2017, revealed the incident following senior Tory William Wragg telling the Commons he has been told of claims MPs who want Boris Johnson ousted have been intimidated and even blackmailed by the whips.

Mr Howlett told Sky News: “I was campaigning as a marginal constituency MP for a project, it was a link road and people remember that in my constituency I was trying to get government funding for it and of course during the Brexit rebellions.

“The whipping operation involved me being told by a whip that if I ended up rebelling and continuing to rebel then I would lose out funding for that particular scheme, which was frankly outrageous at the time.”

He claimed the road would have reduced pollution and congestion in central Bath, where some areas have nitrogen dioxide levels above safe limits.

Underhand tactics from whips ‘been going on for years’

Mr Howlett said he was a new MP at the time but had the support of some senior Tories which meant he received some helpful advice on how to deal with threats from whips.

The former MP said those types of tactics “have been going on for years” so he is “surprised” the government is dismissing claims from current MPs about blackmail and intimidation.

Read more: Boris Johnson recovers his bounce as he vows to fight for his job

A group of 2019 intake Conservative MPs are reportedly thinking about releasing text messages and even a recording with the chief whip making threats.

One of the MPs told the Times: “They pulled me over and I told them I was voting against them.

“They got right up in my face. They told me that if you think you’re getting a single f***ing penny, forget it. If you think a minister is coming to your patch forget it. You’re done.”

Mr Howlett said the evidence “will end up coming out” but added: “An ex-whip told me earlier on today the first rule of whipping is don’t leave any evidence so it seems like they have left a cookie crumb trail.”

Christian Wakeford, the MP who defected from the Conservatives to Labour this week, claimed whips threatened to pull funding for a school in his area if he did not vote with the government on free school meals during COVID.

Tory loyalists ‘do not recognise claims’

Some Conservative MPs have expressed their surprise that whips would threaten MPs.

Fay Jones, an MP first elected in 2019, told Sky News the threat Mr Howlett claimed to have had “isn’t an experience I’ve been through”.

“Their job is to get government business through but some of the reports that have been made and the allegations, they really just don’t ring true with me so I’m a bit confused to be honest.”

Business Secretary Kwasi Kwarteng also said he did not recognise the claims made by MPs this week.

He told Sky News he was “very surprised” and it is not something “I’ve ever heard of” but said it should be investigated.