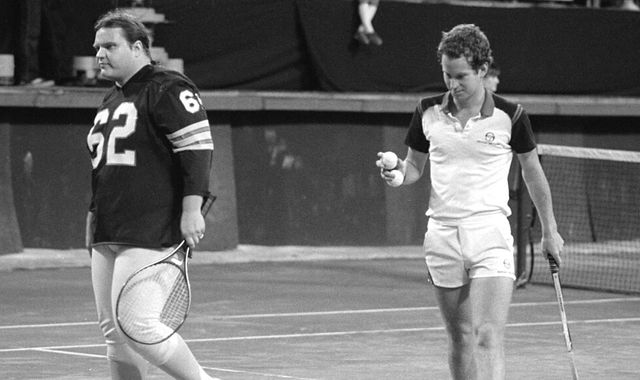 But how did a man named after a minced-meat dish become one of the most recognisable and significant musical and cultural figures in the world?

Sky News analysis of the data behind his career shows why his status as an icon will live on when the night is over, when the morning comes and for years to come.

He sold more than 100 million records during his 54-year career, and his first Bat Out Of Hell album, released in 1977, spent more than 10 years in the Official Albums Charts.

That places him ninth on the all-time list and fourth, behind only Fleetwood Mac, Pink Floyd and Oasis, if you exclude greatest hits albums.

I’d Do Anything For Love (But I Won’t Do That), spent seven weeks at number one in the UK in 1993 and also topped charts in a further 27 countries.

The album version of the song lasts more than 12 minutes – longer than Taylor Swift’s recent record-breaker All Too Well (Ten Minute Version). It has been played more than 21 million times on Spotify.

But as with so many of the biggest cultural icons, he wasn’t restricted to music.

He also has 108 acting credits to his name, including the Oscar-nominated Fight Club, The Rocky Horror Picture Show and the 1997 Spice Girls film, Spice World.

Fellow music-and-acting crossover star Will Smith has just 74 credits, while despite limiting their careers to film alone, Leonardo Di Caprio and Meryl Streep have 46 and 94 respectively, according to IMDb.

Robert De Niro has slightly more – with 125 – but beating two out of three of the biggest names in Hollywood history ain’t bad.

And his fame didn’t end with the age of social media. There are 26 million Google results for a meme in which people suggested what he wouldn’t do for love.

He clearly embraced this newfound notoriety among younger fans.

At Meat Loaf‘s peak it could be said that wherever you were and wherever you went, there was always gonna be someone with his face emblazoned on a T-shirt.

There are now more than 500 active listings for Meat Loaf memorabilia on Amazon and eBay.

One of the products Meat lent his name to was Veg, as part of a vegan food campaign by Frankie & Benny’s.

He didn’t take on the restaurant’s suggestion of a rebrand to Veg Loaf, but was a vegetarian for 11 years as part of a diet that saw him lose 5st (32kg), from his 19st (120kg) peak.

Like a bat out of hell, Meat Loaf the man may be gone, gone, gone – but his legacy is far from over.