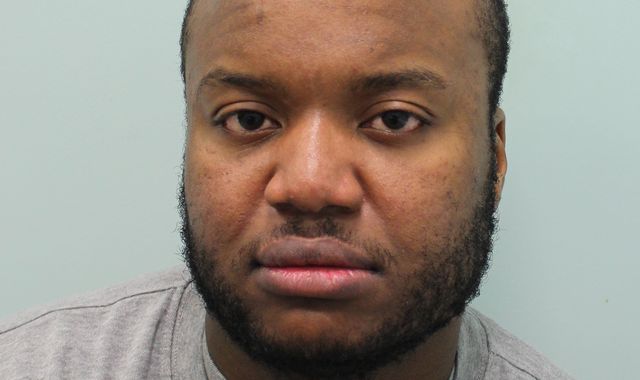 A man who raped and assaulted a woman he met online after locking and chaining her front door has been jailed.

Charles Akpoveta, a 33-year-old delivery driver living in Luton, was sentenced to 17 years in prison at Snaresbrook Crown Court on Monday.

The trial heard how Akpoveta travelled into London on 29 February 2020 to meet a 28-year-old woman he had made contact with on a social media app.

Police said the pair went to her flat in Tower Hamlets where they had consensual sex, but afterwards, Akpoveta’s mood changed and he spat in her face.

The woman asked him to leave but he refused, instead locking and chaining her front door.

He then carried out a number of assaults on her, police said, including beating, biting, strangling and urinating on her.

During the course of the night, the woman managed to phone the police.

Officers attended and arrested Akpoveta and he was taken to an east London police station and subsequently charged with multiple offences.

In November 2021, he was found guilty of four counts of rape, three counts of assault by penetration, three counts of sexual assault and one count of causing a person to engage in sexual activity without their consent.

This was along with three counts of assault by beating at a previous trial in October 2020.

Detective Constable Matthew Cooksey, investigating, said: “First and foremost, I would like to commend the victim of these attacks for her bravery and determination throughout the investigation, in particular dealing with two cross examinations across two trials and her unwavering commitment to working with detectives throughout. Her strength of character is inspiring.

“Throughout our investigation, Akpoveta paraded as a man who had been wrongly accused, claiming that everything which he subjected the victim to was consensual. This couldn’t have been further from the truth.

“I hope that today’s result will give the victim some respite, and also demonstrate the Met’s determination in ending violence against women and girls and bringing predatory offenders to justice.”