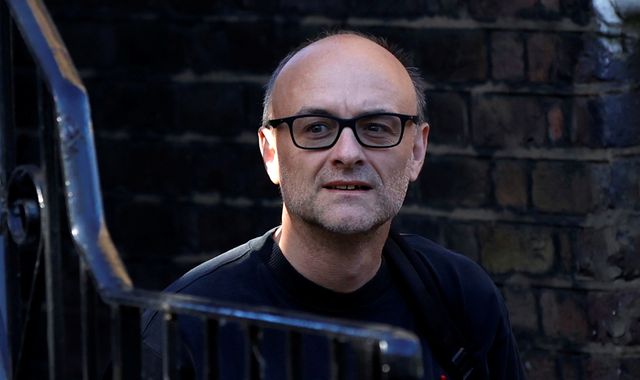 The government has won its Court of Appeal bid to overturn a High Court ruling that it broke the law by handing a COVID contract to a company whose founders were friends of Boris Johnson’s former chief aide Dominic Cummings.

The Cabinet Office paid more than half a million pounds to market research firm Public First in June 2020, including testing public health slogans such as “stay at home, protect the NHS, save lives”.

Last year, the High Court ruled the decision to award the contract was unlawful as it gave rise to “apparent bias” because of a failure to consider any other research agency and record the objective criteria used in the selection.

Not-for-profit campaigning organisation the Good Law Project brought the original case, which questioned the decision to pay the large sum of taxpayers’ money to the firm during the first wave of the coronavirus pandemic.

Its lawyer, Jason Coppel QC, had argued the contract award was “a clear and obvious case of apparent bias”.

The government and Mr Cummings denied the accusations.

In a judgment on Tuesday, the Court of Appeal overturned the previous ruling.

Lord Chief Justice Lord Burnett, sitting with Lord Justice Coulson and Lady Justice Carr, found the question of whether there was apparent bias should have been decided on the reasons behind the decision to give the contract, including that Public First was already doing research and that only two companies had the “scale, expertise and experience” to provide the service at the start of the pandemic.

Lord Burnett concluded a fair-minded and reasonably informed observer would have known this and known that there “was nothing unlawful in the involvement of Mr Cummings in the decision-making process”.

He continued: “Quite apart from Mr Cummings, experienced civil servants… knew what services were urgently needed in a public health emergency and were intimately familiar with the market for their provision.”

Government’s priority ‘has always been to save lives’

Mr Cummings said the Court of Appeal ruling was “total vindication for my decisions on moving super speedy on procurement to save lives”.

He tweeted the Court of Appeal had “seen sense & said I behaved lawfully”, adding that he had been calling for a “serious emergency procurement system” since before the pandemic.

A Cabinet Office spokesperson said: “We welcome the Court of Appeal’s ruling that this contract was awarded entirely lawfully. This includes the court’s firm rejection of the allegation of apparent bias, overturning the previous judgment.

“Throughout the pandemic our priority has always been to save lives and the work by Public First helped to improve vitally important health messages.”

Group to appeal to Supreme Court

Jolyon Maugham, director of the Good Law Project, said the group now intends to take the case to the Supreme Court.

He tweeted: “This is the first substantive judgment against us since 2019. We think, with respect, it’s wrong and we are asking for permission to go to the Supreme Court.”

Following the ruling, Public First founding partner James Frayne said: “Our team worked unbelievably hard for seven days a week – from early morning until late at night – during the height of the pandemic, helping to refine key messages that reduced the pressure on the NHS and prevented many casualties.

“Today’s judgment rightly pays tribute to the team’s efforts and reaffirms what we have always known: that they should be proud of their work.”