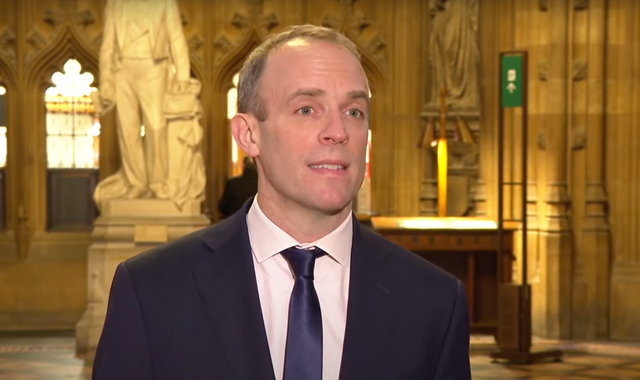 Dominic Raab has said he does not recognise the “caricature” about Number 10 as he denied there was a drinking culture in Downing Street.

The deputy prime minister told Sky News when he was running the country, while Boris Johnson was in hospital with COVID, the staff at Number 10 worked “phenomenally hard under gruelling conditions”.

He told Sky News’ Kay Burley: “I do not personally recognise the caricature that they were all partying, this was incredibly serious and difficult and a dedicated team.

“I’m just telling you what I saw, my experience.”

Mr Johnson is facing calls from within his own party for his resignation after it emerged several events took place during England’s lockdowns in 2020 and 2021.

On Monday, Mr Johnson’s former top adviser, Dominic Cummings, accused the PM of lying to parliament by saying he thought a May 2020 garden party was a work event as he claimed Mr Johnson gave it the go-ahead.

Analysis: Is a culture change possible while Boris Johnson is PM?

Mr Raab said he did not want to get “drawn in to the soap opera” of claims and repeated the line ministers have taken over the past two weeks that he will wait for Sue Gray’s investigation into lockdown events at Downing Street and Whitehall to finish.

The justice secretary mentioned Sue Gray by name eight times during his interview with Kay Burley.

He added that it was “ridiculous” the May 2020 party was in honour of him for taking over as PM while Mr Johnson was in hospital, as has been claimed.

“It was nonsense, I wasn’t invited and I didn’t attend,” he said.

When is Sue Gray inquiry due to finish and what could it mean for the PM?

Mr Raab added that he felt “as frustrated as anyone else” by the multiple claims of parties while the rest of the country could not see friends and family.

“I think double standards are toxic, I get all of that, I get the frustration,” he added.

“But Number 10 has apologised for that, it was right to apologise for it.

“Of course, I want to see compliance, I’m a lawyer by heart, I also recognise as lawmakers the government has got to be seen to take a lead, show it is acting to the highest standards otherwise how can we expect others to follow it?”

Labour shadow cabinet member Jon Ashworth accused Mr Johnson of focusing on “saving his own skin” instead of solving the current cost of living crisis.

Labour shadow cabinet member Jon Ashworth accused Mr Johnson of focusing on “saving his own skin” instead of solving the current cost of living crisis.

And London’s Labour mayor, Sadiq Khan told Sky News: “From what I’ve seen, as somebody not involved in any investigation, for me, it is a slam dunk.

“For me there’s been an admission of liability by the PM, he has been shown to be somebody who is not just arrogant and a liar but evidence of hypocrisy as well.

“One of the reasons I think the PM’s job is untenable and he has got to resign.”

The investigation into events at Downing Street and Whitehall by top civil servant Sue Gray is due to be completed next week.

The investigation into events at Downing Street and Whitehall by top civil servant Sue Gray is due to be completed next week.