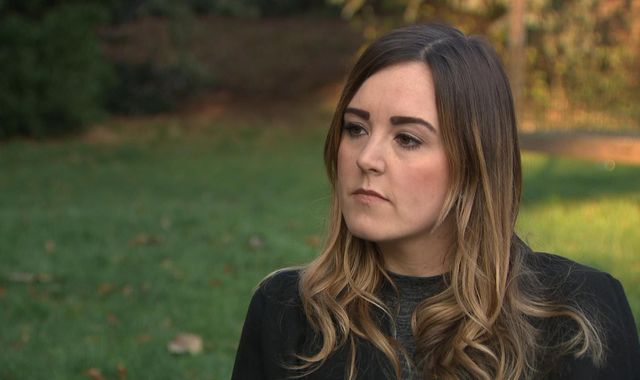 Thousands of women in the UK know little or nothing about cervical cell changes prior to their diagnosis, according to Jo’s Cervical Cancer Trust.

Around 220,000 women are diagnosed with abnormal cell changes every year, but around 51% of the 1,086 surveyed said they didn’t know about cell changes prior to diagnosis, and 39% knew a little.

A further 26% felt ashamed when diagnosed and 21% felt isolated.

She was diagnosed with cell changes in her cervix, caused by Human Papillomavirus (HPV).

‘You think these things would take ages to progress, but they don’t’

Ms Evans told Sky News: “It’s terrifying, I don’t normally cry, I burst into tears just because you expect to have a letter saying your smear test was clear.

“I think especially the younger you are you think these things would take ages to progress, but they don’t.

“I’m a bit of an overthinker anyway and it can take its toll when you think what is the worst case scenario with this? Will I not be able to have children? Will I end up with cervical cancer?”

After undergoing tests, she was diagnosed with CIN 3 – the highest grade of abnormal cell changes.

Ms Evans is campaigning to help break down the barriers and stigma around smear tests.

She says: “Had I not had my smear and had I not had the colposcopy the cells may well have developed into cervical cancer.”

She told Sky News: “One in three women who are invited to screening are not attending that appointment.

“It’s really important that all women and people in the cervix are not worried, are not anxious, and have answers to their questions about all stages of the cervical screening programme.

“The NHS is open for screening.

“Your GP surgeries have gone above and beyond to make sure there’s a safe environment for you when you go for your screening.

“So please, when that letter lands go for screening.”