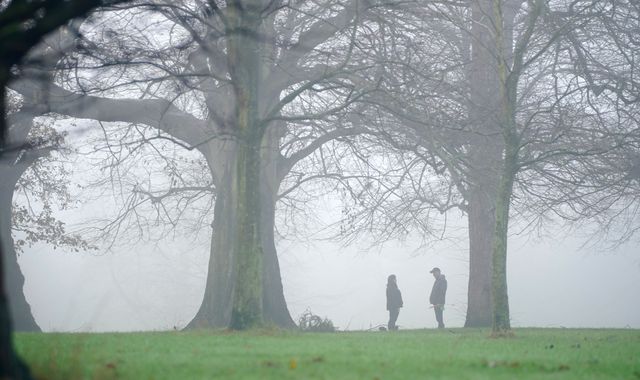 A yellow weather warning has been issued for fog, which is expected to blanket much of the UK this evening and could cause travel chaos.

The Met Office said the fog could freeze in some places, covering most of England and the eastern edge of Wales.

Temperatures are set to drop to near 0C overnight for many areas, which could lead to icy roads.

The warning is in place from 7pm on Monday until midday on Tuesday, extending from the south of Scarborough to east of Manchester in the North, and east of Exeter in the South.

The fog is “likely to cause slower travel and possible disruption”, the Met Office said.

Buses and trains could be delayed, while flights could even be cancelled.

Drivers should expect hazardous conditions and slower journeys, according to the Met Office.

The Met Office said on Twitter: “After a dry and sunny Blue Monday for many, temperatures [are] quickly falling away this evening, especially under the clear skies.

“Mist and fog patches [are] developing in places, becoming locally dense across parts of England and Wales.”

“The fog is going to be most widespread in southern, eastern England, into the Midlands and the east side of Wales too,” he said.

“The fog will tend to clear as the morning goes on,” he added.

“It may linger on in a few spots, but towards lunchtime conditions should be much better.”

He said “not everywhere within that warning will be foggy” but urged drivers to plan for slower travel times.

Meanwhile, Scotland and Ireland could see patchy sunshine and cloud.

Cold temperatures of 3C are expected overnight in Edinburgh, with 2C in Belfast, 1C in London and 0C in Cardiff.

They are around average for this time of the year.

It’s set to get warmer on Tuesday, with the mercury rising to about 7C in London, 8C in Edinburgh and Cardiff, and 9C in Belfast.