Paul Shakespeare: Man jailed for 1990 rape of teenager who was walking her dog 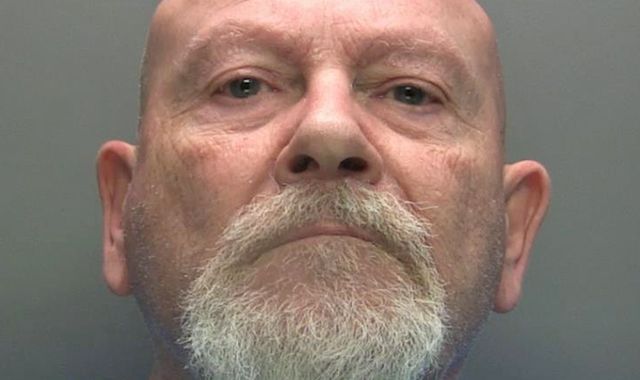 A man has been jailed for nine years after raping a teenage girl who was walking her dog in broad daylight more than 30 years ago.

Paul Shakespeare, now aged 66, was armed with a large sharpened stick when he grabbed his 18-year-old victim from a footpath and dragged her into bushes, where he attacked her.

He then threatened to find her and kill her if she ever told anyone what happened on the afternoon of 29 April 1990 in Cheltenham, Gloucestershire, a court heard.

The crime took place near to a children’s play area on the Honeybourne line, a former railway line area popular with walkers and cyclists, Gloucester Crown Court was told.

‘Don’t say anything, be quick or I’ll kill you’

Prosecutor Virginia Cornwall said Shakespeare had been seen staring at women near the play area before the assault.

She said this was a “premeditated stranger rape when a weapon was used to gain the victim’s submission”.

“The defendant had noticed the teenager alone and he had selected her for what was a premeditated assault,” she said.

“She recalls the stick above his head as he spoke to her, ‘Don’t say anything, be quick or I’ll kill you’.

“She became frightened and obeyed because she was scared.”

After the rape, he “asked where she lived and where she worked and it seems she told him through fear”, she said.

“Before running off he told her, ‘I know where you live and where you work and I’ll come and find you. If you tell anyone I’ll kill you’,” Ms Cornwall said.

Shakespeare claimed the sex was consensual

Following the attack, the teenager approached a woman and told her what happened, which led to a police investigation.

Despite local and national coverage, the rapist was not caught – even after the victim took part in a Crimewatch reconstruction in 2008.

It was only last June that Shakespeare was arrested for possession of an offensive weapon and his DNA later matched the samples taken from the rape.

He initially claimed he had consensual sex with the teenager.

The victim, now in her 40s, told the court the rape led her to try and take her own life.

“I couldn’t tell my family because of the shame I felt, I felt embarrassed, violated and dirty,” she said.

“To this day my mum is not aware of what happened to me. Being raped will haunt me for the rest of my life.”

‘I didn’t know if I would live or die’

She said she was “the most scared I have ever been” on that day.

“I didn’t know whether I would live or die – I was petrified.

“I am grateful he has finally admitted what he has done.

“I can only hope that he is remorseful, not only to me, but to his family for the pain he has caused for knowing that he is now a rapist.”

Shakespeare, of Upperby, Carlisle, pleaded guilty to rape and possession of an offensive weapon at a previous hearing.

Some of Shakespeare’s relatives ‘unaware’ of attack

His lawyer said he was suffering from epilepsy and was now using a wheelchair.

“There are family members who were unaware of his offending 30 years ago,” Kim Whittlestone said.

“He has been married for 20 years. His wife works in the NHS as a nurse, and he has three adult children.

“All have to come to terms with what occurred, and he feels remorse and shame for that.”

Shakespeare was also placed on the sex offenders’ register for life.