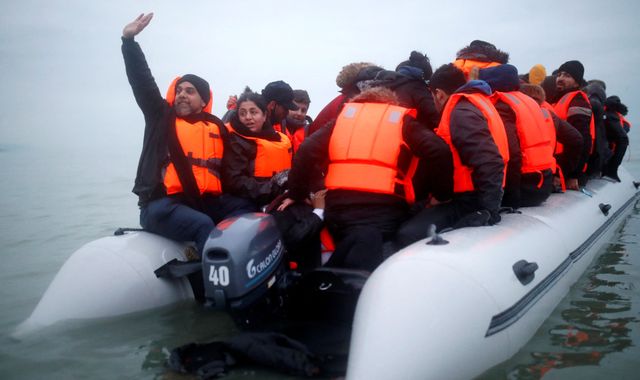 Home Secretary Priti Patel has confirmed she has asked the Ministry of Defence (MoD) to put the Royal Navy in charge of policing small boats crossing the Channel.

Over the weekend, it was reported plans – dubbed Operation Big Dog – are being drawn up to save Boris Johnson’s premiership as he faces calls to resign over the Downing Street lockdown party scandal.

As well as sacking key staff, the plan focuses on major policy changes, including placing the navy in charge of preventing small boats from crossing the Channel.

Downing Street is also looking to send migrants to countries such as Rwanda, Ghana and Gambia for processing and resettlement to prevent migrants from making the perilous journey to the UK.

The home secretary confirmed on Monday she has asked the Ministry of Defence to put the navy in charge of policing small boats crossing from France to the UK.

Defence sources have told Sky News that the PM has asked the armed forces to take command of Channel security.

Rear Admiral Utley has been appointed to co-ordinate the move and be in command of government assets, which is understood to focus on data sharing and exploitation.

It is thought the Navy will be a largely unseen presence, with Border Force still the public face of operations.

Ms Patel told MPs “it matters not which countries” migrants are sent to, the government is considering “all options” in moving asylum processing centres offshore and “will continue to discuss this with a range of countries”.

“No one department can solve this issue in the Channel on their own,” Ms Patel told the Commons.

“My decision to bring the MoD in is vindication that we need to absolutely strengthen our defences in the Channel.”

Asked about the military plans, Education Secretary Nadhim Zahawi told Sky News: “It is a good idea that there is a single command and control, and that includes not just naval vessels but all other vessels, including Border Force, so that you actually have a co-ordinated operation in terms of the small boats.

“A really important idea is the legislation that Priti Patel has put through parliament to allow us to have a much better way of dealing with illegal migration because there are legal routes for migration, you know, I’m the son of immigrants.”

He said it would provide the co-ordination needed “to go after the illegal smugglers who are putting these people’s lives at risk”.

“The fault lies with the smugglers, these criminals, so you have to go after them,” he said.

“The way you do it is a multi-pronged strategy, so you have got co-ordination on the Channel, you’ve got the Nationality and Borders Bill and implementing that properly and then you’ve got legal routes for migration.”

The Nationality and Borders Bill, which is making its way through the Lords, would make it a criminal offence to attempt to enter the UK without a visa.

It would also allow the government to remove a person’s citizenship without telling them.

Read more: What is the Nationality and Borders Bill and why is it so controversial?

Under the new Channel plans, the Times reported a rear admiral will have the power to direct Border Force, fisheries protection, the coastguard and customs and excise to carry out surveillance or intercept those crossing the Channel in small boats.

By processing migrants in other countries, the government hopes it will deter people from making the crossing in the first place.

Last year, a record 28,391 migrants arrived in 1,020 boats but that number will likely be beaten this year, with nearly 500 crossing in the first two weeks of this year, despite sub-zero temperatures.

On Thursday last week, at least 271 people on board 10 small boats reached England – more than the whole of January last year.