Cost of living crisis: Are wages keeping up with price rises? 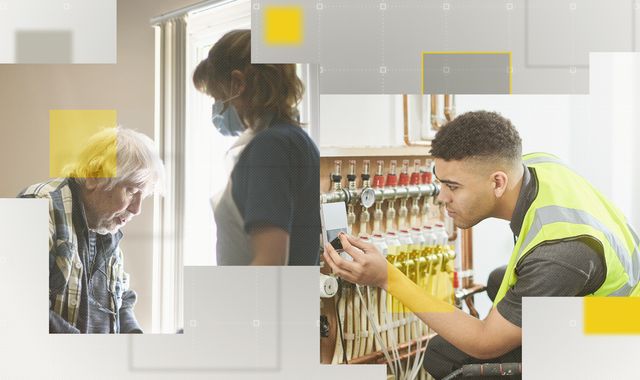 With lots of focus on the current cost of living crisis, new data for Sky News reveals which professions have been most affected.

UK wage data from hiring website Indeed shows that only a few jobs have experienced wage increases far higher than inflation since the start of the pandemic.

Those with the highest pay growth tend to be in roles that have experienced a surge in demand over the last two years.

Home care nurses, for example, experienced by far the largest increase in real wages of more than 50% between February 2020 and November 2021. Truck drivers and welders also saw rises of 18% or more.

But only a handful of jobs have had increases of this magnitude. In fact, many people have seen a decline in spending power since COVID-19 first hit, as prices have increased by more than their wages.

Fitters (people who install and service industrial machinery or do home repairs) have experienced the largest drop. Their real pay has fallen 14% since early 2020.

Quantity surveyors have also experienced a decline in spending power. Damian Fitzpatrick, who works in the industry, says this is a “knock-on effect of the pandemic”, exacerbated by the rising cost of materials.

“The prices of materials and other things has gone through the roof so there’s always the fear that buildings projects will be put on hold,” he says, “That drips down to people’s jobs as there’s less need for surveyors and construction managers.”

Mr Fitzpatrick is particularly conscious of the rising cost of living as he’s about to have a child.

“Bills have gone up, food prices have gone up, prices in bars and restaurants have gone up,” he says. “If I have all these extra outgoings in the next year and the market might become unstable, that does play on your mind.”

In which sectors has spending power increased most?

Even in sectors with strong pay growth, it’s not expected to last. Jack Kennedy, economist at Indeed Hiring Lab, says that growth was caused by pandemic-related hiring squeezes.

“Since the reopening of the economy, a lot of sectors have been trying to hire similar types of workers,” he says. “So, we’ve seen candidate supply not keeping pace with resurgent demand and that’s driven high pay growth in specific sectors.

“But we’re not seeing any signs of any real gains for the average worker, which is concerning given the squeeze on energy bills and the general cost of living.”

So, what is the big picture?

Peter Levell, associate director at the Institute for Fiscal Studies (IFS), says that the “current crunch” will be exacerbated by upcoming changes to taxes, benefits and the energy price cap in April.

“All of those are going to weigh on the cost of living of households in addition to the increase in inflation,” he says. “So, nominal wage growth would have to accelerate quite a bit to ensure that people’s living standards for this year haven’t fallen relative to the previous year.”

People without salaries, such as the elderly and people not in the labour market, are likely to be badly affected.

New IFS analysis shows that the planned changes will squeeze poorer households the most, as they spend a higher proportion of their income on energy bills.