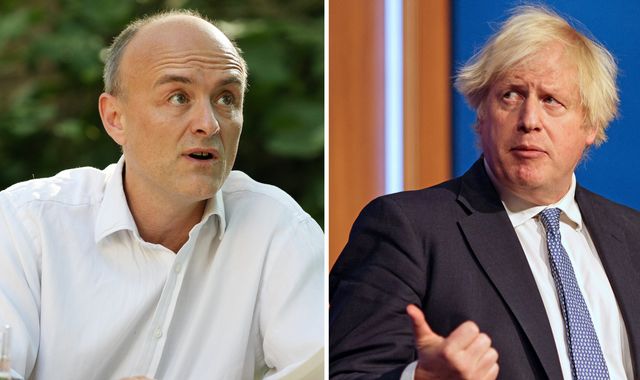 Boris Johnson’s former chief adviser has said the prime minister knew in advance about a Downing Street drinks party during the first coronavirus lockdown and agreed that it could go ahead, claims that have been confirmed to Sky News by a second source.

In an updated post on his Substack page, Dominic Cummings said he raised his concerns about the event in the Number 10 garden in May 2020 directly with the PM and would “swear under oath this is what happened”.

“PM was told about the invite, he knew it was a drinks party, he lied to parliament,” he wrote on Twitter, posting a link to the latest entry.

Mr Johnson’s principal private secretary Martin Reynolds emailed officials with an invite to the event on 20 May, suggesting attendees “BYOB” (bring your own bottle, or booze).

The emergence of this email has provoked anger and led to calls, including from some Conservative MPs, for the PM to resign.

If it is established that Mr Johnson knew in advance about the party and lied to parliament in saying he believed it was a “work event”, he would be in much greater danger of being forced out of office.

The 20 May event is the latest in a string of reported gatherings in Downing Street and other government departments during COVID restrictions in 2020 and 2021.

Among the latest to make headlines were two parties held in Downing Street on the eve of Prince Phillip’s funeral last year.

A second Downing Street source has told Sky News the PM was warned about the 20 May gathering before it took place.

They have told Sky’s political editor Beth Rigby that, per Mr Cummings’ blog post, Mr Reynolds was warned about the event after sending out the email invitation, and that Mr Johnson was also informed.

But Downing Street said earlier on Monday it was not true that Mr Johnson was warned about the gathering in advance and repeated the PM’s assertion to MPs last week that he “implicitly” believed it was a work event.

Number 10 has repeated this denial in the wake of Mr Cummings’ latest post.

Mr Cummings left Number 10 in November 2020 and has since been a persistent critic of Mr Johnson.

‘You’ve got to grip this madhouse’

In his Substack post, Mr Cummings said he warned Mr Reynolds that his email “broke the rules” and also raised his concerns directly with the PM.

“Amid discussion over the future of the cabinet secretary and PPS himself, which had been going on for days, I said to the PM something like: ‘Martin’s invited the building to a drinks party, this is what I’m talking about, you’ve got to grip this madhouse’,” he wrote.

“The PM waved it aside.”

Mr Cummings claimed Number 10 is “throwing out as much confusing chaff as possible, such as nonsense about a ‘drinking culture’ intended to shift blame” as pressure on the PM continues.

But he said MPs should “focus on the basics” over the 20 May gathering.

“The PM’s PPS [principal private secretary] invited people to a drinks party. The PPS was told to cancel the invite by at least two people.

“He checked with the PM whether the party should go ahead. The PM agreed it should.

“They both went to the party. It was actually a drinks party.

“The PM told MPs repeatedly that he had no idea about any parties.

“The events of 20 May alone, never mind the string of other events, mean the PM lied to parliament about parties.

“Not only me but other eyewitnesses who discussed this at the time would swear under oath this is what happened.”