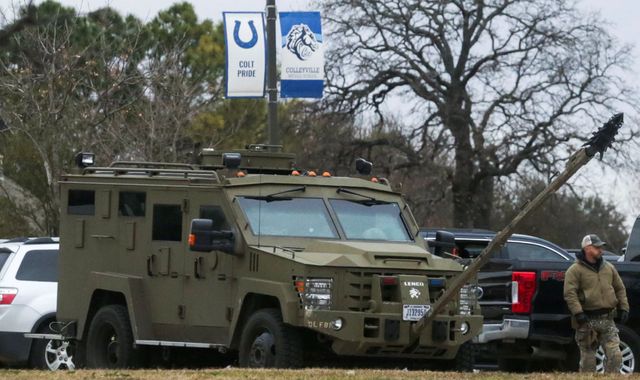 A suspect who was shot dead by officers after taking four people hostage at a Texas synagogue was British, Sky News understands.

One hostage at the Congregation Beth Israel in Colleyville was released six hours into the 10-hour standoff, before an FBI SWAT team entered the building at around 9pm local time on Saturday and the three others were released unharmed.

FBI Special Agent in Charge Matt DeSarno said earlier there was no immediate indication that the man had connections to any broader plan but that the agency’s investigation “will have global reach”.

A spokesperson for the UK Foreign, Commonwealth and Development Office said it is “aware of the death of a British man in Texas and are in contact with the local authorities”.

The hostage-taker was earlier heard demanding the release of Aafia Siddiqui, a Pakistani neuroscientist suspected of having ties to al Qaeda, who was convicted of trying to kill US military officers while in custody in Afghanistan.

He said he wanted to speak to her. She is being held at FMC Carswell in Fort Worth, Texas, following her conviction in 2010.

The motive for attacking the synagogue, which is around 30 miles from Dallas, is still unclear, although police are trying to establish whether he and Siddiqui are related.

Mr DeSarno said on Saturday night that the man had been identified “but we are not prepared to release his identity or confirm his identity at this time”.

Police were first called to the synagogue at around 11am local time on Saturday, when they evacuated people from the surrounding area, FBI Dallas spokeswoman Katie Chaumont said.

Part of the attack was caught on a livestream of the morning shabbat service being broadcast on Facebook.

Local media reports claim an angry man was heard shouting about religion and “his sister”, before the feed cut out at around 2pm. They claim the suspect had a British accent.

A rabbi in New York City had earlier received a call from the rabbi thought to be held hostage in Texas demanding Siddiqui’s release, according to law enforcement officials, who are now interviewing him.

One of the hostages was let go, before the SWAT team stormed the building, witnesses heard loud bangs and Texas Governor Gregg Abbott announced the crisis was over.

“Prayers answered. All hostages are out alive and safe,” he wrote on Twitter.

President Joe Biden, who was briefed on the crisis as it unfolded, praised the “courageous work” of all those involved in the rescue operation.

“There is more we will learn in the days ahead about the motivations of the hostage taker,” he said in a statement.

“But let me be clear to anyone who intends to spread hate – we will stand against anti-Semitism and against the rise of extremism in this country.”