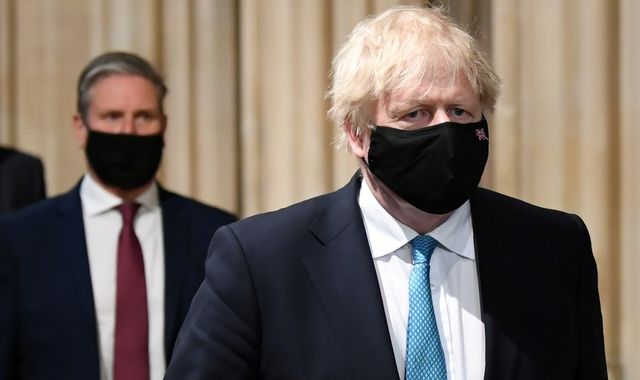 Sir Keir Starmer is turning up the heat on Boris Johnson on Downing Street drinking after new allegations of “wine time Fridays” in Number 10.

In a major speech, the Labour leader will claim the partying allegations of the past few days reveal that the prime minister is guilty of “deceit and deception” and unable to lead.

The Mirror claims Mr Johnson encouraged his aides to “let off steam” despite being banned from socialising in big groups under his own lockdown rules.

It is even claimed that the regular events were so popular that staff invested in a £142 drinks fridge to keep their bottles of white wine, prosecco, and beer cool.

It is alleged that aides took turns on Fridays to visit a local Tesco Metro with the now-notorious wheelie suitcase – used on the night before Prince Philip’s funeral – to fill up the 34-bottle fridge.

The latest lurid accusations come after No. 10 was forced to apologise to the Queen after the disclosure of boozy parties in Downing Street on the eve of Prince Philip’s funeral.

Somewhat appropriately, the latest row over lockdown parties has prompted Cabinet ministers to claim privately that the PM is in the “last chance saloon”, according to The Times.

And with reports that leadership rivals Rishi Sunak and Liz Truss are wooing Tory MPs and donors, the Financial Times quotes one long-time supporter of Mr Johnson lamenting: “He’s done. It’s over.”

Confronted with the Mirror’s allegations, a Downing Street spokesperson made no attempt to deny them and relied on the now-familiar response that they would be examined in civil servant Sue Gray’s inquiry.

What could Sue Gray’s inquiry into No 10 parties mean and who decides what happens next?

“There is an ongoing investigation to establish the facts around the nature of gatherings, including attendance, setting and the purpose with reference to adherence to the guidance at the time,” the spokesperson told Sky News.

“The findings will be made public in due course.”

In his onslaught against the PM, in a speech to a Fabian Society conference, Sir Keir will condemn the Conservative government’s record on the pandemic and expose the infighting over whether Mr Johnson should remain in office.

“Rather than concentrating on getting through the pandemic and bringing down waiting lists, this self-indulgent Tory party is instead having a fight about a leader who they should have known from the start is not fit for office,” he will say.

“We are witnessing the broken spectacle of a prime minister mired in deceit and deception, unable to lead.”

Sir Keir is raising the stakes in the battle over Mr Johnson’s future amid growing fury among the Tory grassroots and claims that support for the prime minister is draining away.

Confronted with the mutiny among his MPs and activists, the PM is said to be plotting a fightback to save his premiership, which he is calling Operation Save Big Dog.

Analysis: Wagons circle around PM but his government is paralysed by ‘partygate’ scandal

His plan is said to include drawing up a list of officials he will ask to offer their resignations and axing Plan B COVID restrictions including COVID passports, masks, and working from home.

But with Conservative MPs mostly in their constituencies this weekend, opposition to the PM could harden as voters and disgruntled activists deliver a brutal verdict on him.

:: Watch Sir Keir’s speech live on Sky News from 10am