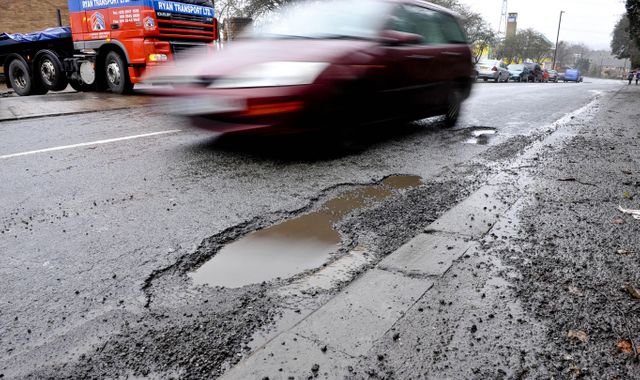 The breakdown recovery company said some 1.5% of all call-outs attended by patrols last year were for issues including broken suspension springs, damaged shock absorbers, and distorted wheels, all caused by potholes.

Drivers are more than one-and-a-half times more likely to break down after hitting a pothole today than they were in 2006, according to the firm.

RAC head of roads policy, Nicholas Lyes, said the issue was “ridiculous because it is almost entirely avoidable if roads were maintained properly”.

“The rot appears to have well and truly set in when it comes to the country’s roads, with our patrols going out to vast numbers of drivers who, through no fault of their own, are breaking down because of the wear and tear caused by potholes,” he said.

“With drivers contributing so much in terms of tax to the government, the very least they deserve are roads that are fit for purpose.

“Potholed roads are a menace, not a mere annoyance. They can cause thousands of pounds of unnecessary damage to drivers’ vehicles, make using our roads uncomfortable, and can be a serious road safety hazard for anyone on two wheels.”

Potholes are often caused by rainwater getting into cracks in the road. When the water freezes, it expands and creates further deterioration in the road surface.

Mr Lyle warned the number of drivers hitting potholes could rise even further this year as there is “plenty of cold weather still to come this winter”.

Analysis by the Local Government Association found that annual funding for more than 9.5 million pothole repairs has been removed from council budgets in England.

A report by the Asphalt Industry Alliance claimed councils in England and Wales would need to spend a total of £10 billion over a decade to bring all their pothole-plagued roads up to scratch.

A Department for Transport spokeswoman said: “The Government is providing over £5 billion of investment over this Parliament for highways maintenance to local highways authorities across England.

“This is enough to fill millions of potholes a year, repair dozens of bridges, and resurface roads up and down the country.”