E.ON apologises for sending socks to customers to help keep heating costs down 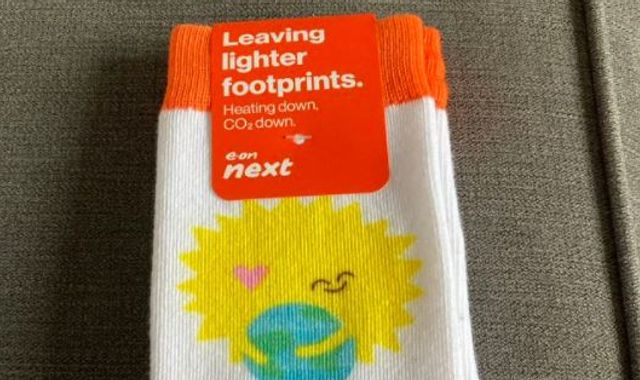 Energy company E.ON says it is “incredibly sorry” after it sent customers pairs of socks to help them keep their “heating down”.

In a leaden-footed reference to climate change, there was a helpful pun, too: “Leaving lighter footprints.”

E.ON is the second energy firm this week to be accused of patronising its customers after SSE recommended doing star jumps and cuddling pets to keep warm.

At a time when energy bills are rising, and some people may be struggling to heat their homes during the winter, E.ON’s footwear has turned into something of an Achilles heel.

One Twitter user tweeted a picture of the pair she received, writing: “Seriously, energy prices are going up. What the bl**dy hell,” followed by two red-faced emojis.

Another said she had received the SSE email “recommending cuddling the cat” and one of her relatives had been sent “an actual pair of socks”.

The socks were reportedly sent to customers who had engaged with one of E.ON’s energy saving campaigns last year to encourage them to continue to save energy.

But E.ON said it should not have gone ahead with the plan in light of major price rises that are about to hit millions of households.

The firm said it was “incredibly sorry for how we have made some people feel”.

It added: “In light of the seriousness of current challenges that many people are facing, this mailing should have been stopped and we are sorry.”

A spokesperson said: “To help our customers, E.ON has invested billions of pounds and helped millions of people around the country to improve their homes.

“That includes better insulation and more efficient heating and it also involves simpler things like providing help and advice to customers so they can use less energy in their everyday lives.”