NHS under pressure all over, but where are the pinch points? 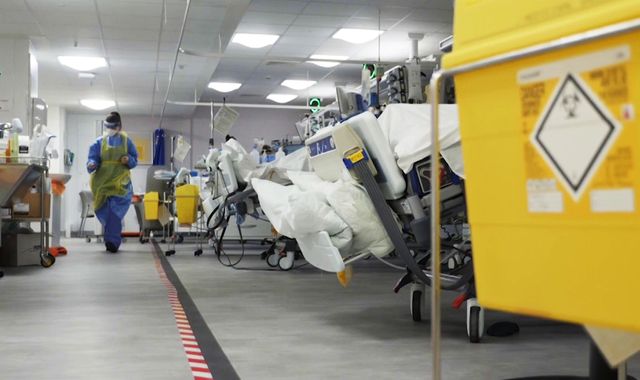 The NHS often struggles with demand at winter, even in normal times.

Despite fewer COVID patients requiring beds this year compared to last, high case numbers among hospital staff and the general pressures from the second year of the pandemic mean that there are strains felt across the entire service, as highlighted by new NHS England data released today.

Worst month on record for A&Es

December was the worst month on record for A&Es in England.

Almost 40% of people who turned up to major A&Es had to wait more than four hours to be seen in December. The target is 5%.

Not a single area met the target.

In Barking, Havering and Redbridge University Hospitals NHS Trust, the worst performing trust last month, seven out of every 10 people had to wait more than four hours to be seen.

Enter your postcode or search for your NHS trust below to see how your area fared for A&E waiting times, and find out how many beds are free where you are.

NHS health check: How the service is performing this winter

Those bad wait-time figures are despite fewer people turning up to A&Es in December than any month since March 2021.

It was the lowest December figure since 2015 other than the pandemic-affected 2020.

More than 120,000 people who were admitted to hospital from A&E in England also had to wait more than four hours for a bed or starting their treatment, even after waiting to be seen in A&E.

That time is known as a “trolley wait” and as a proportion of people admitted to hospital it is also higher than ever.

Nearly a quarter of people were waiting at least four hours for a hospital bed, an operation or an X-ray even after the decision was made to refer them there from A&E.

To put it simply, people have never had to wait longer between stepping in the door of an A&E to starting their treatment.

Part of the reason for this poor performance at A&E is inevitably due to staff sicknesses.

It makes sense that if COVID cases are high in the general population as they are now, they will also be high among doctors, nurses and other NHS staff.

They will also be high among children, which of course means NHS workers who are parents will have to take time off to care for them even if they aren’t one of those infected themselves.

The number of COVID absences has risen fourfold since the first week of December, while the total number of absences is up more than 50%.

In both South Tees and North Tees and Hartlepool NHS Foundation Trusts, the number of workers off with COVID has risen tenfold in a month, from an average of 39 to over 450.

Matthew Taylor, chief executive of the NHS Confederation said he welcomed the change in isolation period from seven to five days as a way to combat this.

“As long as the change is strongly underpinned by the science and people have access to tests, we welcome this.”

One of the most crucial pressure points in the NHS is beds in hospital.

If there are fewer beds available for new patients, it is harder to get people through A&E, which in turn backs up ambulances arriving at A&E which then can’t get out to new calls.

In England as a whole, fewer than 6% of beds were free for new patients as of 11 January. The South West was worst hit with fewer than 3% of beds free.

That’s despite the South West having the lowest share of beds being taken up by COVID patients of any of the English NHS regions.

In the Great Western Hospitals NHS Foundation Trust in the South West, there were just two beds available on the latest available date, out of 538 across all the hospitals it covers.

Part of the reason that beds are scarce in hospitals is because there aren’t safe places to release patients that don’t require in-hospital care but aren’t healthy enough to be left to fend for themselves.

Usually they would be released to care homes or at-home community care settings. But staff shortages, following the vaccination mandate and increasing competition from other hirers, combined with longstanding funding concerns, have contributed to the fact that it’s not been as easy for people to leave hospital safely to other care settings.

On 9 January, 12,396 beds in England were taken up by people who no longer needed to be there. To put that into context, that’s only just below the total number of people who were in hospital with COVID on that day (12,974) and there were only 6,656 beds free in the whole of England.

For most of these measures updated figures won’t be received for another month. Some of the figures are unlikely to improve even then as the full context of Omicron may not have been reflected in these stats.

The hope for NHS workers is that their hard-work and stamina, competing with rising demand over 18 months of a pandemic, will soon start result in a better service for people using the NHS once more.

“If we can move beyond COVID and it really is starting to become more manageable then hopefully later this year we can get to the situation that when the NHS works flat out it is actually able to make inroads into those backlogs that have built up during the last two years,” Mr Taylor said.

“But we need a bit of time when COVID is not such a big consumer of our resources to be able to do that.”

Share
Facebook
Twitter
Pinterest
WhatsApp
Previous articleAnnecy shootings: Detention of man held in connection with al-Hilli family killings extended as French media reports he was questioned in 2015
Next articleNHS tracker postcode search: See how your local trust is performing through the winter