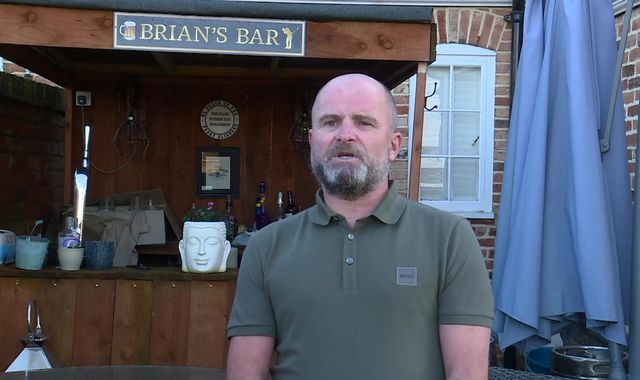 A man who was fined for breaking lockdown rules wants a refund after Boris Johnson admitted attending a “bring your own booze” party at Downing Street in May 2020.

Kieron McArdle, who lives alone, said he would give the money to a mental health charity, telling Sky News that his own wellbeing had dipped during the pandemic.

His friend Brian died during lockdown, meaning he couldn’t attend his funeral and give him the “send-off he deserved”.

Mr McArdle, from Coleshill, Warwickshire, said the prime minister, who has claimed the Downing Street garden party on 20 May 2020 was a “work event”, is “insulting” the people who voted for him – and it is time for him to step down.

Mr Johnson has been “wriggling round for days” and is “not fit to lead this country”, he said.

The Metropolitan Police appears to have “turned a blind eye” to social events in Downing Street during lockdown and Scotland Yard is “as bad as the government”, he added.

Why was Mr McArdle fined?

Three friends who were worried about Mr McArdle decided to pop round to see him in March 2021.

They sat in the garden, stayed for an hour, and remained socially distanced.

The 50-year-old explained: “Friends of mine said they felt I was down. I live alone, and they thought I’d been struggling, so they took it upon themselves to say we’re going to pop round for an hour, we’ll distance, keep it quiet, to perk me up basically – that was the plan.

“My friend Brian died at the start of lockdown. We couldn’t attend his funeral, couldn’t give him the send-off he deserved, because we were playing by the rules.”

When the police arrived, Mr McArdle said he and his friends “felt quite threatened”, were “treated like criminals” and “made to feel worthless”.

But they “paid the fine instantly because we accepted what we did was wrong”, he said.

He added that he was “happy to pay the fine” but it “should be the same for everybody”.

More from Sky News:
Sue Gray is tasked with investigating Downing Street parties – but who is she?
PM’s apology was ‘a load of old waffle and I don’t believe it’, says care home resident

‘Without a doubt, PM should resign’

In scathing comments about the prime minister, Mr McArdle said: “For me, they’ve been wriggling round for days thinking ‘what are we going to come up with’ and that’s the best they’ve come up with – it’s just an insult to the population and people who voted for him.”

Asked whether Mr Johnson should resign, he said: “Without a doubt – 100%. I think anybody else would have gone by now – there’s been members of parliament who’ve quit for doing a lot less than this.

“I just think he thinks he’s infallible. It’s time for Boris Johnson and the government to hold their hands up, stop wriggling and say, yes, this happened, accept fines, like the normal people have to pay their fines, and move on.”

In addition to security cameras, Mr McArdle said there must be a police presence in Downing Street “24 hours a day” and they have to get involved.

Scotland Yard is already in touch with the Cabinet Office.

Asked what he would say to Mr Johnson, were he to meet him, Mr McArdle said: “I would say you’re not fit to lead this country. Someone else must do it. You wriggle, you don’t take responsibility for your actions, it’s time for you to say, ‘enough is enough, I am not a fit and proper leader, or person, time to go’.”

Share
Facebook
Twitter
Pinterest
WhatsApp
Previous articleCOVID-19: Omicron takes out 3% of the workforce while a fifth of firms are hit by higher cancellations
Next articleMI5 has warned that Chinese government ‘agent’ has been ‘active’ in UK parliament, MPs told