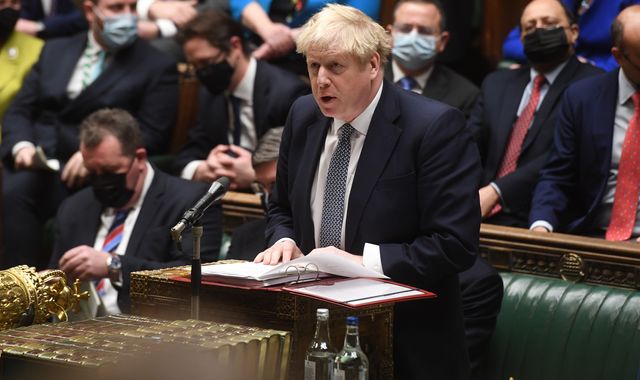 Boris Johnson is facing demands from Conservatives to resign after he confessed to attending a Downing Street garden drinks party during the UK’s first national lockdown.

Amid open speculation about Mr Johnson’s political future – and whether he could be forced out of Number 10 by his own party – two Tory MPs described the prime minister’s position as “untenable”.

The calls for Mr Johnson to quit came after his House of Commons apology about the event failed to quell anger about the Downing Street “bring your own booze” bash on 20 May 2020.

At Prime Minister’s Questions on Wednesday lunchtime, Mr Johnson admitted he went into the Number 10 garden “just after 6pm on 20 May 2020 to thank groups of staff” before going back into his office “25 minutes later”.

The prime minister told MPs he had “learned enough” about multiple claims of lockdown-breaching parties in Downing Street “to know there were things we simply did not get right”.

And he acknowledged the public “rage” about their sense that COVID rules were “not being properly followed by the people who make the rules”.

But Mr Johnson, referring to the 20 May event, said he “believed implicitly that this was a work event”.

“With hindsight, I should have sent everyone back inside,” he added. “I should have found some other way to thank them.

“And I should have recognised that, even if it could be said technically to fall within the guidance, there would be millions and millions of people who simply would not see it that way.”

‘The party is over prime minister’

Mr Johnson offered his “heartfelt apologies”, but Labour leader Sir Keir Starmer called on the prime minister to “do the decent thing and resign”.

Sir Keir branded Mr Johnson’s defence “so ridiculous that it is actually offensive to the British people” and described the prime minister’s actions “a clear breach of the ministerial code”.

He added that Mr Johnson was a “pathetic spectacle of a man who has run out of road” and said the public would see him as “lying through his teeth”.

Sir Ed has also written to Metropolitan Police commissioner Cressida Dick to call on her to launch a full police investigation into the 20 May event.

He added that the prime minister should be interviewed under caution following his confirmation that he was at the event.

However, it is the calls for him to resign from within his own Conservative Party that will most worry Mr Johnson.

Scottish Conservative leader Douglas Ross, a Tory MP who also sits in the Scottish Parliament, called for the prime minister to quit due to his admission that he attended the 20 May event.

His call was backed by other Scottish Tories at Holyrood, as well as his predecessor Baroness Davidson.

Fellow Tory backbencher Sir Roger Gale claimed Mr Johnson’s description of a “work event” would “stretch credibility beyond the bounds of any acceptability” and said the prime minister had suffered a “third strike” and should go.

Sir Roger previously submitted a letter of no confidence in the prime minister to Sir Graham Brady, the chair of the Conservative Party’s 1922 Committee, following the row over Dominic Cummings’ lockdown trips.

If 53 other Tory MPs also submit letters to Sir Graham, then Mr Johnson will be subject to a confidence vote.

Mark Harper, a former Tory chief whip, said it would be “up to every Conservative MP to consider what action needs to be taken” once a report by Sue Gray, a senior civil servant, looking into the “partygate” row is published.

Another Conservative backbencher, Simon Hoare, was asked by Sky News whether the prime minister was now safe after his Commons apology.

In his statement at the beginning of PMQs, Mr Johnson made a plea for MPs to allow Ms Gray to complete her inquiry into multiple allegations of lockdown breaches in Downing Street “so that the full path can be established”.

He vowed to make a further statement to MPs once Ms Gray’s work was complete.

Chancellor noticeably quiet as he stays away from Commons

As allies of Mr Johnson attempted to mount a pushback, deputy prime minister Dominic Raab joined other cabinet ministers in calling for Ms Gray to now be allowed to conclude her investigation.

Michael Gove, Nadine Dorries and Sajid Javid were also among government ministers to repeat that call.

Chancellor Rishi Sunak, considered by some to be the most likely to replace Mr Johnson in Number 10, was not present for Mr Johnson’s apology in the Commons as he made a trip to Devon to visit a local business.

And, as his silence on the matter began to be noticed, Mr Sunak posted on Twitter after 8pm on Wednesday night: “I’ve been on a visit all day today continuing work on our #PlanForJobs as well as meeting MPs to discuss the energy situation.

“The PM was right to apologise and I support his request for patience while Sue Gray carries out her enquiry.”

Jacob Rees-Mogg, the Leader of the House of Commons, dismissed Mr Ross’s call for the prime minister to resign.

Prior to Wednesday, both the prime minister and Number 10 had refused to comment on various allegations about the 20 May event.

But Number 10 said after PMQs that Mr Johnson had not seen an email invitation to the drinks gathering, which is revealed to have been sent by the prime minister’s key aide Martin Reynolds to, reportedly, more than 100 members of Downing Street staff.

The email urged invitees to “bring your own booze” and to “make the most of the lovely weather” with “socially distanced drinks” on 20 May.

Mr Johnson’s press secretary declined to explain what was the basis for the prime minister’s claim that the 20 May gathering may “technically” have fallen within COVID guidance at the time.

Number 10 also refused to say whether Mr Johnson’s wife Carrie attended the event, whether the prime minister noticed food and drink there, or if he complied with the request to bring a bottle.

Mr Cummings, who was Mr Johnson’s former chief adviser, said the prime minister’s excuse that he thought the event was within the rules was “b********”.

Hannah Brady, a spokesperson for the COVID-19 Bereaved Families for Justice group, said: “The prime minister’s lies have finally caught up with him.”