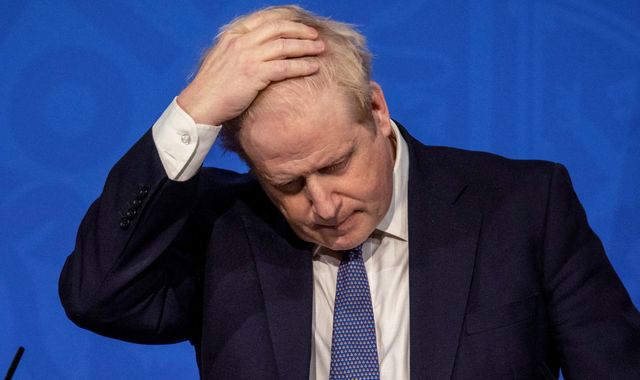 Ms Rayner told Sky News the prime minister has “not only broke the rules, but he’s lied to the British public”.

She said the fact Mr Johnson has not yet come forward to offer an explanation of the “bring your own booze” event, which is said to have been attended by more than 40 people, “shows the measure of the man”.

The PM will face the House of Commons at midday amid intense pressure from not just the opposition, but also Conservative MPs and Tory donors.

Watch and follow PMQs live from midday on Sky News

Both Conservatives and opposition MPs are demanding the prime minister confirms whether he attended a drinks gathering in the Downing Street garden on 20 May 2020.

The Liberal Democrats are calling for the PM to resign, saying he has “become a threat to the health of our nation”.

Amid increasing anger at the claims, with two opinion polls suggesting the public was turning on the PM, Wednesday’s PMQs is set to be one of the most important Commons moments of Mr Johnson’s political life.

Labour have confirmed that Keir Starmer will be able to face Mr Johnson at noon after recording the required negative lateral flow tests, thus ending his isolation period after testing positive for COVID last week.

No government minister was made available for media interviews this morning, and Ms Rayner described it as “shameful” that the PM has so far avoided scrutiny about the latest party allegations.

She said: “I think it is shameful that Boris Johnson, over the last couple of days, hasn’t answered the central question: yes or no, were you at a party in 10 Downing Street when everyone else was in lockdown?

“So I think it is not surprising today that no one would turn up to answer it because, quite frankly, to anyone who lost a loved one, who was not able to visit them and see them in their dying hours, it is pretty despicable to find that they were partying at Number 10.”

Ms Rayner added: “It shows that he has not only broken the rules, but he has lied to the British public, and I think that makes his position completely untenable.”

Downing Street has refused to say if Mr Johnson was present at the May event, but Sky News understands he and his now wife were among around 40 people to attend at a time when such gatherings were banned.

The PM has said it is a matter for Sue Gray, the senior civil servant who is investigating a series of reported parties in Downing Street and elsewhere in Whitehall over the course of 2020, to determine what happened.

There was frustration among Tories at the failure of Mr Johnson to address the allegations on Tuesday by sending Paymaster General Michael Ellis to respond on his behalf to an emergency Commons question on the issue.

In a possible indication of waning support among Conservative MPs for their leader, the government’s own benches were sparsely populated on Tuesday.

Mr Ellwood told Kay Burley: “We have got to regroup, we have got to upgrade the Number 10 machine and rebuild trust with the nation.”

“It is not blowing over,” he added of the party allegations.

“How do you defend the indefensible? You can’t! It’s embarrassing and what’s worse is it further erodes trust in politics when it’s already low. We need openness, trust and honesty in our politics now more than ever and that starts from the top!” he tweeted.

Asked if Mr Johnson should resign, senior Conservative MP Huw Merriman told Sky News the situation is “really difficult”, adding that “it is time for clarification”.

Speaking to Sky News on Tuesday, Scottish Conservative leader Douglas Ross demanded Mr Johnson “just answer the question” about whether he attended the ‘bring your own booze’ event in May 2020.

Scotland Yard has said it is in contact with the Cabinet Office about the latest allegation.