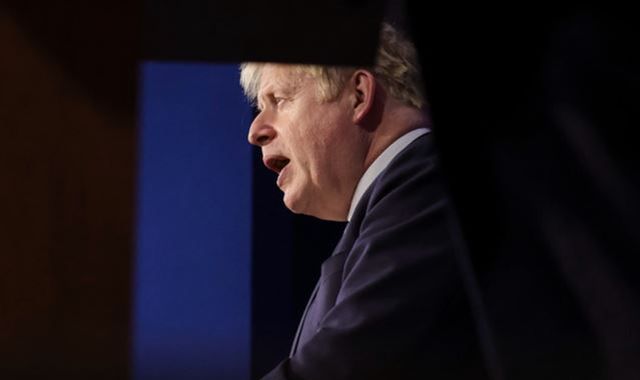 How this ends is still so uncertain, but what is clear is that Boris Johnson is now in the throes of the most acute political crisis of his premiership.

So, when he turned up stony-faced in the Commons on Wednesday to offer an account of that Downing Street drinks event at the height of lockdown in May 2020, he had to give the PMQs performance of his premiership.

There was, as his MPs had demanded, an apology of sorts.

He was sorry that the May 2020 garden gathering left the impression that those in Downing Street were not properly following rules, and he admitted he had briefly joined the jamboree and acknowledged “the rage” felt by the public.

Live updates as Boris Johnson is urged to resign

But it soon became clear – particularly when put under scrutiny by Sir Keir Starmer’s forensic questioning – that the PM wasn’t apologising for holding the event full-stop, but rather how it had gone down with the public and the party.

He maintained this ‘bring your own booze’ event, attended by 40 people during lockdown when such social gatherings were banned, was “a work event”.

“I should have recognised that, even if [the event] could be said technically to fall within the guidance, there would be millions and millions of people, who would not see it that way,” said the PM. “To them and this house I offer my heartfelt apologies.”

Asking the Commons – and crucially his own MPs – to await the findings of top civil servant Sue Gray’s independent inquiry before casting judgement, the prime minister hoped to buy more time.

But if he went into the House of Commons in acute political danger, he came out of it no better off.

Sir Keir and his team scent blood as the normally measured and cautious leader of the opposition took off the gloves and demanded – for the first time ever – that the prime minister stand down.

“[This] is a pathetic spectacle of a man who has run out of road. His defence that he didn’t realise it was a party is so ridiculous it is actually offensive. Will he do the decent thing and resign?”

This then the moment of no return in the mind of Labour. As one figure close to the Labour leader put it to me during those tense exchanges on Wednesday, whether he goes is “up to the Tories, but he’s a busted flush now, no question”.

And that is the big unknown question rippling through Westminster today.

Is this now terminal for Boris Johnson? Ask around and MPs are genuinely unsure, which itself is a shocking state of affairs for a PM who just two years ago delivered an 80-seat majority.

Much depends on what Sue Gray concludes and whether she backs the PM’s version of events or criticises him.

From his performance and explanation today, Mr Johnson must be hoping Ms Gray does not find anything that proves he was involved in any authorisation or approval of any questionable events in his backyard.

Is that the wriggle room he believes will get him off the hook? Whatever side of the Johnson fence you sit on, MPs agree this report will be decisive for his future.

MPs are also watching to see if the Metropolitan Police decide to open an investigation in the 20 May event, aware that having a sitting prime minister in such a situation is extremely grave.

Others are not now willing to give him the benefit of the doubt. In another huge blow to the PM on Wednesday, Scottish Conservative leader Douglas Ross, having heard the PM’s explanation, became the first senior Tory to call for him to go.

“Regrettably, I have to say his position is no longer tenable. I spoke to the prime minister this afternoon and I set out my reasons and I explained to him my position,” Mr Ross told reporters on Wednesday afternoon.

This the first time a senior Conservative has publicly called on the prime minister to go – Number 10 must now be extremely fearful more might follow.

Mr Johnson did at least today buy himself some more time and give himself a little breathing space by asking MPs to judge him not now, but when the Gray report comes out.

On the ropes and cornered now, Mr Johnson is gambling she will offer him an escape hatch when she delivers her verdict.

But even if that is enough to stave off a call for a confidence vote from his MPs, will it be enough to convince the public this is a politician who deserves their votes, or has he blown it?

His MPs can oust him from Downing Street, but so can the voting public too – and his own party will be watching the polls, their post bags and what happens at the ballot box in the local elections in May.