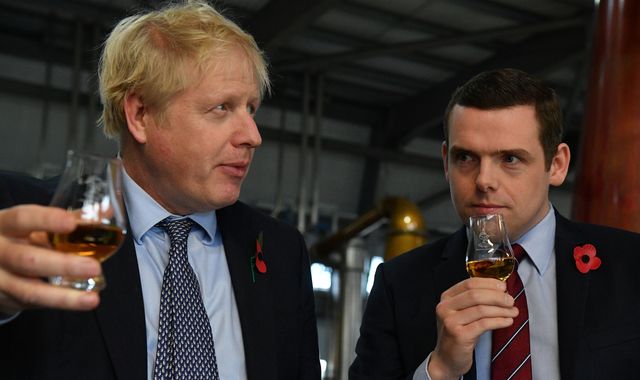 Mr Ross claimed the prime minister’s position was “no longer tenable” following Mr Johnson’s admission that he attended a “bring your own booze” drinks event at Number 10 at the height of the UK’s first national lockdown.

He said he feared the “partygate” row was “simply going to be a continuing distraction to the good governance of the country”.

Mr Ross revealed he had spoken to Mr Johnson on Wednesday afternoon to “set out my reasons and I explained to him my position”.

The Scottish Tory leader would not reveal how the prime minister responded.

But Mr Ross added that Mr Johnson “believes that he didn’t do anything wrong and he has put up a defence of his position”.

“I also have to look at the information I’ve got in front of me and stick with the position that I made quite clear yesterday that, if he did attend that party, he couldn’t continue as prime minister,” he said.

Mr Ross, who is an MP at Westminster as well as sitting in the Scottish parliament, said there was “significant unrest and concern” among Conservatives both in London and Edinburgh about the Downing Street drinks event on 20 May, 2020.

His demand for Mr Johnson to resign was also backed by other senior Tory MSPs, including Murdo Fraser and Liz Smith, as well as Mr Ross’s predecessor Baroness Davidson.

Senior Tory MP, Sir Roger Gale, earlier told Sky News that Mr Johnson had left himself in “an impossible position” and was now facing an “exit route” from Number 10.

In an apology in the House of Commons on Wednesday lunchtime, the prime minister said his 25-minute attendance at the “bring your own booze” gathering in the Downing Street garden came because he “believed implicitly that this was a work event”.

It is understood that around 40 people – including Mr Johnson and his wife Carrie – attended in total, amid suggestions that more than 100 Downing Street staff had been invited via an email from one of the prime minister’s key aides.

Sir Roger said the prime minister’s description of a “work event” would “stretch credibility beyond the bounds of any acceptability”.

“I’m sorry, that was a party,” the North Thanet MP told Sky News.

Sir Roger recalled Mr Johnson’s assurance to MPs’ last month that there was “no party” in Number 10, as the prime minister faced previous allegations of a Number 10 Christmas bash in December 2020.

“Well, I’m sorry, he attended one of them and it clearly was a party and that means that he misled the House of Commons,” Sir Roger said.

He added, for those ministers who mislead the Commons, that “there is really only one exit route”.

Sir Roger previously submitted a letter of no confidence in the prime minister to Sir Graham Brady, the chair of the Conservative Party’s 1922 Committee, following the row over Dominic Cummings’s lockdown trips.

If 53 other Tory MPs also submit letters to Sir Graham, then Mr Johnson will be subject to a confidence vote.

As allies of Mr Johnson attempted to mount a pushback, deputy prime minister Dominic Raab joined other cabinet ministers in calling for senior civil servant Sue Gray to be allowed to conclude her investigation into multiple allegations of lockdown breaches in Downing Street.

“If there are questions, issues that are raised about this, that’s precisely why Sue Gray is there to conduct the investigation and make sure all the answers can be provided in a way that is sober, calm and full,” Mr Raab said.

Forest of Dean MP Mark Harper, a former Tory chief whip, said it would be “up to every Conservative MP to consider what action needs to be taken to ensure our country has the leadership it deserves” once Ms Gray’s report is published.