Boris Johnson lockdown party accusations: The politicians and officials who have had to resign for breaking COVID rules 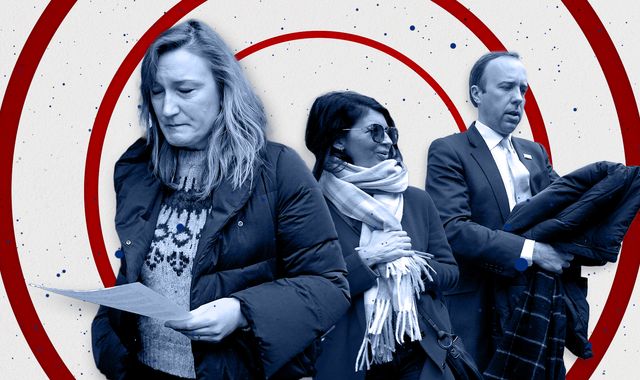 Boris Johnson is facing further accusations he broke lockdown rules by attending a garden party at Number 10 during the first lockdown.

There is uncertainty over what the fallout for the PM could be, after insisting he thought it was a “work event”, but he would not be the first person in public office to pay the price for breaking COVID rules.

Since the pandemic began in early 2020, there have been several examples of politicians and officials breaking the rules and having to resign – and also those who have quit over a disagreement with the measures.

Just a couple of months into the pandemic, Scotland’s chief medical officer was the first person in the UK’s political world to resign over breaching COVID restrictions.

Photos were published by the Scottish Sun of her and her family visiting Earlsferry in Fife, more than an hour’s drive from her home in Edinburgh.

At the time, Scotland was under a full lockdown – under advice from Dr Calderwood – in which people had to stay at home apart from exercise and getting essential supplies.

The consultant was given a police warning and then admitted she had made another visit to the house in Fife the weekend before but insisted she would remain in her post.

Ms Sturgeon backed Dr Calderwood to stay, but the doctor then apologised and stepped down, saying her behaviour “risks becoming a distraction”.

Advice from the Imperial College epidemiologist prompted Boris Johnson to lock down England in March 2020 for the first time.

As a member of the government’s Scientific Advisory Group for Emergencies (SAGE), Prof Ferguson frequently appeared in the media to encourage people to obey the rules.

But he was caught out having a relationship with a married woman who visited him at his London home during the lockdown.

On at least two occasions, she travelled across London to spend time with the scientist, who had been dubbed Professor Lockdown.

Prof Ferguson had only just finished two weeks of self-isolation after testing positive on the first occasion she came over.

He resigned, saying he “made an error of judgment” and regretted any undermining of the messages over social distancing – but said he “acted in the belief I was immune” after having COVID and isolating.

Scottish MP Margaret Ferrier was suspended in October by the SNP after allegedly taking a PCR test because she was suffering symptoms, then taking a 400-mile trip to Westminster before getting her result – which was positive – and returning the next day.

She resisted calls to resign as an MP and remains as an independent MP for Rutherglen and Hamilton West.

On 4 January 2021, Ms Ferrier was arrested and charged by Police Scotland with “culpable and reckless conduct”.

She will stand trial this August, accused of travelling between Glasgow and London knowing she had COVID symptoms and despite being told to self-isolate.

Ms Ferrier is also said to have travelled in and around Glasgow over three days in September 2020.

She appeared in the dock at Glasgow Sheriff Court last week, when she pleaded not guilty to wilfully exposing people to the risk of illness and death and was granted bail.

The images, published by The Sun, were from 6 May – more than a week before the easing of social distancing rules around close contact indoors for people from separate households.

Mr Hancock remains an MP but has split from his wife Martha, who he was married to for 15 years and has three children with.

One of SAGE’s most prominent members, Sir Jeremy Farrar had been very public in advocating for stronger action against COVID-19 than the government was taking at the time.

He resigned, insisting it was not down to a fresh disagreement with the government but because he wanted to concentrate on his work as director of the Wellcome Trust, the UK’s largest medical charity.

Since the pandemic started, Sir Jeremy has made it known he favoured more stringent measures to control the spread of COVID than ministers have adopted.

In his book Spike, published last summer, he said he considered resigning from SAGE in September 2020.

“I began to question the point of giving advice to a body that chose not to use it,” he wrote.

Mr Johnson’s adviser resigned after a video showed her joking about a Christmas Party at Downing Street in 2020 while London was under Tier 3 restrictions.

During a tearful statement on her doorstep the day after the video emerged, the former ITV journalist offered her “profound apologies” for joking about the party during a rehearsal for a news conference in which other aides asked her about the gathering, said to have taken place on 18 December last year.

In the footage of Ms Stratton from December 2020, senior Number 10 aides can be heard jokingly referring to a “business meeting” and a “cheese and wine” event.

The incident kicked off what is now referred to as “partygate”, with several Number 10 lockdown parties under investigation by senior civil servant Sue Gray.

A former London mayoral Conservative candidate, Shaun Bailey resigned as chairman of the influential police and crime committee at the London Assembly.

He stepped down from the role after photos were published by the Mirror showing him with dozens of staff members at a party in December 2020, when household mixing was banned.

The week before his resignation, the Conservative Party revealed four members of Mr Bailey’s mayoral campaign team had been disciplined for holding an “unauthorised gathering”.

Days after the party took place, London was moved into stricter Tier 4 restrictions and Mr Bailey tweeted the new measures were “tough on every Londoner” and “my family has had to cancel plans and I’m sure yours has too”.

The PM’s Brexit minister resigned from the cabinet, saying he “couldn’t support certain policies, most recently on COVID restrictions and plan B”.

He had intended to leave his role in early 2022 after informing Mr Johnson in early December but said it had been leaked so he had to leave just before Christmas.