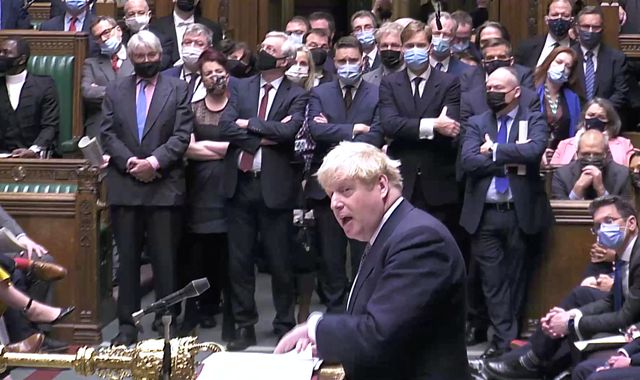 Boris Johnson has apologised after admitting that he attended a Downing Street garden drinks party during England’s first national lockdown.

The prime minister admitted he “went into that garden just after 6pm on 20 May 2020 to thank groups of staff” before going back into his office “25 minutes later”, telling MPs: “I believed implicitly that this was a work event.”

Acknowledging the public “rage” over the incident, the PM continued: “With hindsight, I should have sent everyone back inside. I should have found some other way to thank them.”

Responding to the prime minister’s admission, Sir Keir Starmer called for Mr Johnson to “do the decent thing and resign”, branding his defence as “so ridiculous that it is actually offensive to the British people”.

The PM reiterated that it is a matter for Sue Gray, the senior civil servant investigating a series of reported parties in Downing Street and elsewhere in Whitehall over the course of 2020, to determine the exact details of what happened.

“I know that millions of people across this country have made extraordinary sacrifices over the last 18 months. I know the anguish they have been through – unable to mourn their relatives, unable to live their lives as they want or to do the things they love,” Mr Johnson told the Commons.

“I know the rage they feel with me and with the government I lead when they think in Downing Street itself the rules are not being properly followed by the people who make the rules.

“And though I cannot anticipate the conclusions of the current inquiry, I have learned enough to know there were things we simply did not get right, and I must take responsibility.”

‘Clear breach of the ministerial code’

Calling Mr Johnson’s actions “a clear breach of the ministerial code”, Sir Keir said the prime minister is a “pathetic spectacle of a man who has run out of road”.

“Why does the prime minister still think that the rules don’t apply to him?”

Accused by the Labour leader of “lying through his teeth”, Mr Johnson said Sir Keir should “wait until the inquiry has concluded” so that “the full facts can be established” before questioning him further on the matter.

Meanwhile, Liberal Democrat leader Sir Ed Davey has written to Metropolitan Police Commissioner Cressida Dick, calling on her to launch a full police investigation into the 20 May Downing Street party.

Sir Ed said Mr Johnson should be interviewed under caution following his confirmation that he was at the event.

Downing Street had previously refused to say if Mr Johnson was present at the “bring your own booze” event on 20 May 2020, which the PM’s principal private secretary Martin Reynolds invited colleagues to by email.

Following PMQs, Number 10 said Mr Johnson did not see the email invitation and refused to say whether the PM and his wife attended the event, whether he noticed food and drink there or if he brought a bottle to it himself.

The PM’s press secretary declined to explain what the basis was for the PM’s claim in the Commons that the 20 May 2020 gathering may “technically” have fallen within the guidance, but said Mr Johnson will accept the “facts” established by Ms Gray in her review.

In his remarks, the prime minister said: “Number 10 is a big department with a garden as an extension of the office, which has been in constant use because of the role of fresh air in stopping the virus.”

Mr Johnson’s former aide Dominic Cummings said the PM’s excuse that he thought the event was within the rules was “b********”.

Hannah Brady, spokesperson for COVID-19 Bereaved Families for Justice, said: “The prime minister’s lies have finally caught up with him.”

Some Tory MPs had publicly expressed frustration at Mr Johnson’s failure to address the allegations until now, with no government minister made available for media interviews on Wednesday morning.

Reacting to PMQs, Conservative MP Sir Roger Gale said the PM is on “very thin ice indeed”, telling Sky News he has written to the 1922 Committee of backbench Tory MPs saying he believes there should be a leadership contest within the party.

Mr Hoare also said he had heard the Number 10 party on 20 May 2020 was to say “thank you” to Dominic Raab, who was then the foreign secretary, for stepping in for the PM while he had been off ill with coronavirus.

A spokesperson for Mr Raab said this is “categorically untrue”, adding that the now justice secretary “wasn’t invited and didn’t attend”.

Share
Facebook
Twitter
Pinterest
WhatsApp
Previous articleSpiking: Woman felt ‘overwhelming shame’ after believing she was drugged, parliamentary committee hears
Next articlePrince Andrew sex assault allegations – What are his options after he fails to get US judge to dismiss accuser Virginia Giuffre’s case?