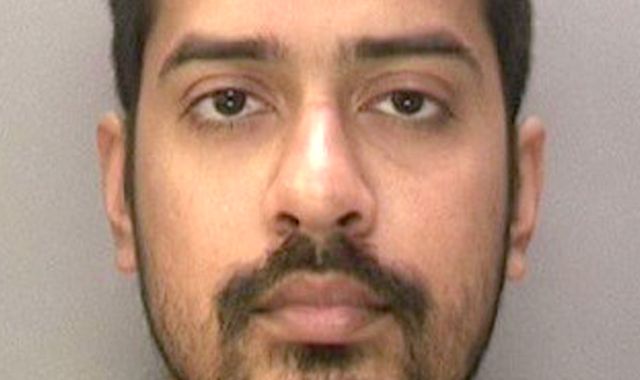 A prolific online sexual predator was caught only after investigators at the FBI contacted the UK’s National Crime Agency despite more than a dozen of his victims reporting him to British police beforehand, Sky News has learnt.

Last month, 26-year-old Abdul Elahi was jailed for 32 years after pleading guilty to 158 offences, including blackmailing victims to abuse themselves, their siblings, and children.

Some of the girls and women who Abdul Elahi coerced into sending intimate images of themselves have complained about their interactions with British police, being repeatedly told that they shouldn’t have sent the messages, and incorrectly informed that there was no way to investigate the person who had blackmailed them because they used WhatsApp to communicate.

“The lifelong mental effects faced by victims could be decreased massively if we were listened to when speaking up in the first place,” one of his victims, who had been blackmailed when she was still in secondary school, told Sky News.

“The acts are described as ‘awful’ and ‘some of the worst ever seen’ when talking about all of his victims combined, but when it was just me going to my local police station, somehow the blame was on me.”

Victims, academics, and support groups are calling for additional training for police in both receiving reports from victims and investigating similar cases in the future.

He had initially been arrested on 19 December 2018 but continued to offend for almost two years as the Crown Prosecution Service (CPS) did not believe there was enough evidence to press charges against him.

A spokesperson for the CPS told Sky News: “There had been a huge investigation covering several countries which involved a vast amount of evidence that had to be examined thoroughly. We charged Elahi as soon as our legal test was met.

“The prosecution case was so strong that Elahi pleaded guilty. His 32-year prison sentence reflects the appalling offences he committed against so many people,” they added.

A spokesperson for the National Crime Agency (NCA) said: “Abdul Elahi is one of the worst sexual offenders the agency has ever investigated and caused utter devastation to victims all round the world.

“The investigation into his offending was extremely complex involving 20 countries, thousands of potential victims and a series of linked offenders.”

In reference to the CPS demands regarding evidence collection, they said: “Critically, prosecutors required the NCA to reflect the totality of Elahi’s industrial offending which involved an enormous amount of work with information required from foreign jurisdictions which is a very lengthy process.

“To manage the risk around Elahi we secured a court imposed sexual risk order after he was first arrested and arrested him three times in total before he was convicted and jailed for 32 years,” they added.

Abdul Elahi’s initial arrest by NCA officers in 2018 followed the agency being contacted by the FBI, which investigated him over the suspected blackmailing of a 15-year-old girl.

The NCA confirmed that it was aware of 13 victims who had reported his crimes to local police forces before Abdul Elahi was identified as a result of the American and British investigation.

“The NCA and NPCC are working together to ensure that victims of mass offenders receive a co-ordinated response,” the agency said.

Victim told she ‘was in the wrong’

Several of the girls and women targeted by Abdul Elahi complained that they felt blamed as victims by the responses they received from police.

One who spoke to Sky News said she was told on three occasions she shouldn’t have sent images of herself to the prolific blackmailer when reporting the initial offence, and that “I was in the wrong as I was the one who had created the child pornography”.

There is no defence in the law that protects children who have been coerced into creating indecent images of themselves. As a result, although such victims are generally not prosecuted, police do record them as suspects when taking down the details of these crimes – potentially driving some officers to tell the victims that they shouldn’t have sent the pictures.

The same victim told Sky News she was surprised when specialist officers from the NCA turned up at her house, as she had no prior contact with the agency.

She described her experience with them as “completely different” as they were “really empathetic compared to the police I spoke to”.

“They were quite focused on making sure I felt like it wasn’t my fault and that I could come to them if I needed any more help with it. And it was just a whole lot more understanding, really,” she said.

In a victim statement, another girl who had been blackmailed by Abdul Elahi said: “The basic message I got from [the police] was just that I shouldn’t have done it, and there’s not really much they can do because it’s through WhatsApp which is all encrypted messaging.

“A lot of it for me was on Skype as well, so there was pretty much no evidence of the details of what he’d done,” she added.

But there is a significant amount of information that investigators can glean from services such as Skype, which does not use end-to-end encryption, and even from WhatsApp, which does, as the successful FBI and NCA investigation proved.

The value of this data depends on the steps that the suspect has taken to anonymise themselves, but their phone number and IP address should allow law enforcement to begin to identify them and how they operate.

Even in end-to-end encrypted messaging apps such as WhatsApp, the message content is still available if police have the victim’s phone.

In cases where the victim had deleted the messages and blocked Abdul Elahi’s number, his number itself could have been retrieved from the app’s blocked list – allowing police to send a request for information about that number to WhatsApp and to the mobile network operator.

“They didn’t really seem that interested in that part of it,” one victim told Sky News about their interaction with police, adding: “They never even suggested a way they could take it further.”

Research from the University of Suffolk published in 2018 found that roughly 95% of police staff have never received any training in investigating non-consensual sharing of intimate images.

For nearly half of the staff who had received training in how to conduct these investigations, it had been delivered via an online tutorial, just over half of whom said they found it moderately useful, and nearly a third only slightly useful.

The study – which said there was “an urgent need for training across police forces” – also reported that fewer than a fifth of police force members knew how to collect evidence from technology companies.

“The reluctance to invest in cybercrime related resources and training may be a deterrent in reducing online criminal behaviour,” it added.

The lack of skills and training to investigate Abdul Elahi’s crimes – as victims described the police responses – also stands in contrast to a report on digital investigations by Europol, which ranked the content of messages as only the seventh most important type of evidence that law enforcement could collect.

The most important types of evidence according to Europol were connection logs and the IP address used at registration, which are still available to police when investigating WhatsApp messages and conversations.

A spokesperson for WhatsApp told Sky News: “Using the information available to us, we respond swiftly to valid requests for data to support law enforcement investigations – as we always will.”

What the police have said

“We will pursue all lines of inquiry and prosecute people where appropriate. When there is evidence of sexual abuse, coercion, blackmail, or exploitation, it is absolutely right that a criminal investigation is launched, and charges brought against those responsible.

“Where police have concerns about possible online abuse and blackmail, they will work together with other agencies, including schools, to ensure that the necessary steps are taken to safeguard children as soon as possible, and to enable offences to be investigated.

“The College of Policing has produced training which all officers involved in these types of investigations can access,” Deputy Chief Constable Critchley added.

Intimate images of people under the age of 18 can be reported to the Internet Watch Foundation here.