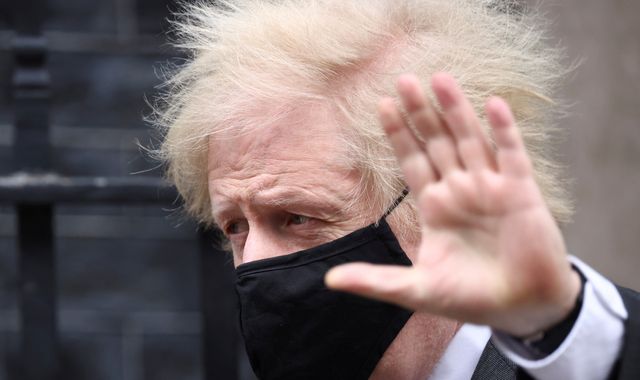 A senior Conservative has told Sky News that claims Boris Johnson and his wife Carrie attended a drinks event in the Downing Street garden during the UK’s first national COVID lockdown are “indefensible”.

They told Sky News’ political editor Beth Rigby that the situation is “as bad as it gets”.

“The fact that [Oliver] Dowden was telling people what they couldn’t do from one room then less than an hour later this was happening in the garden is indefensible,” the senior Tory said.

Meanwhile, Sir Keir Starmer has told the PM to “stop lying” and “come clean” about the “bring your own booze” event reportedly held on 20 May 2020.

Accusing the PM of “deflections and distractions”, the Labour leader called on Mr Johnson to be honest with the British public about the event which Sky News understands both the PM and his then fiancée attended.

“Boris Johnson, your deflections and distractions are absurd. Not only did you know about the parties in Downing Street, you attended them. Stop lying to the British public. It’s time to finally come clean,” Sir Keir said.

Commons Speaker Sir Lindsay Hoyle has granted Labour an urgent question on the garden party allegations, which is due to take place at around 12:30pm.

Earlier on Tuesday, Health minister Ed Argar told Kay Burley he “can understand why people are angry” about the new allegations.

Mr Argar said it is “absolutely right” that Sue Gray – the senior civil servant leading an inquiry into multiple allegations of COVID rule-breaking in Downing Street and other government buildings – looks into the matter.

He added: “I don’t know what did or didn’t happen.”

Mr Argar told Sky News it is “not appropriate” to comment on what Sue Gray “may or may not conclude” in her investigation of the Downing Street party allegations, but that if wrongdoing is found, “appropriate disciplinary action” should follow.

And shadow climate change secretary Ed Miliband told Sky News there is now a “pattern” of the PM “not telling the truth”, adding: “The PM cannot hide behind this inquiry.”

“I think his position is very difficult,” Mr Miliband added.

Explainer: What parties are alleged to have taken place in government during lockdown?

Speaking to reporters on Tuesday, the PM’s official spokesperson said Mr Reynolds “continues in his role” and still has the full confidence of Mr Johnson.