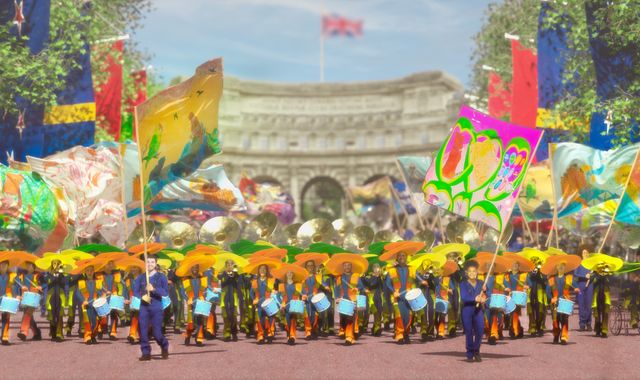 The programme of events marking The Queen’s 70th year on the throne has been revealed by Buckingham Palace.

Her Majesty’s Platinum Jubilee will include performances by some of the world’s biggest names, as well as the Queen opening up some of her private estates to the public.

However, despite the plans in place, it is unclear how much the Queen will actually be able to take part in, after she was ordered to rest by doctors in the latter part of last year.

Instead, it is believed that other members of the Royal Family will take on much of the duties in her place, including Prince Charles and Camilla, Duchess Of Cornwall.

The Queen would usually spend the anniversary of her coronation privately at Sandringham – but next year, given the significance of the occasion, will be slightly different.

Celebrations officially begin today, with Fortnum and Mason launching its Platinum Pudding Competition – a contest to find a dish worthy of the Queen’s 70th year on the throne, with the likes of baking royalty Dame Mary Berry on the judging panel.

The idea is that the dish will serve as a lasting reminder of the celebrations, alongside the Green Canopy initiative, which will plant trees to be presented to the Queen at the end of the year.

Then between 12 and 15 May, more than 1,000 performers and 500 horses will take part in a show in Windsor Castle, taking the crowds on a journey through history from Elizabeth I to the present day.

On 2 June, a four-day bank holiday weekend begins – kicking off with a special Trooping The Colour on Horse Guards Parade in central London.

On the same day – the UK, along with the Isle of Man, the Channel Islands and its Overseas Territories, will all light a beacon at the same time as one at Buckingham Palace.

The next day, a service of Thanksgiving will be held in the grand surrounds of St Paul’s Cathedral, ahead of a celeb-packed Party At The Palace on 4 June.

Those lined up to perform at the show have not yet been named, but it has been trailed as bringing together some of the biggest stars in the world.

On the Sunday, 5 June, Britons will be able to come together for the Big Jubilee Lunch, marking the final day of the bank holiday period.

Usually closed off to the public, Balmoral and Sandringham will be opened to local residents for the long weekend too.

Volunteers, along with dancers, musicians, military personnel and key workers will tell the story of the Queen’s 70 years on the throne in the Platinum Jubilee Pageant, in which a River Of Hope will be paraded along the Mall – made up of 200 silk flags.

School children will also be getting involved, and have been asked to create a picture for how they would like the planet to look over the next 70 years, with the best ones being put on to the flags.

The following month, July, a trio of displays to mark the occasion, as well as the Coronation and the Queen’s multitude of Jubilees, will be put on at royal residences.

Share
Facebook
Twitter
Pinterest
WhatsApp
Previous articleZendaya says new season of Euphoria could be ‘triggering’ and ‘difficult to watch’ for some people
Next articleBarry Bennell: Eight men who claim they were abused by paedophile lose court fight after suing Manchester City