Golden Globes 2022: Amid British success, are the awkward awards reflective of broader change in Hollywood? 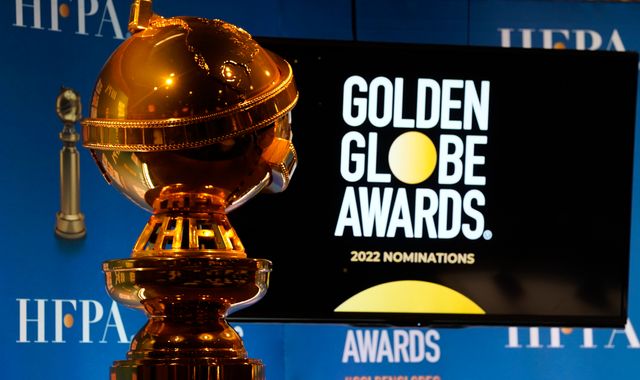 This is Kate Winslet’s fifth Golden Globes win, and alongside Meryl Streep (for her Trump comments) and Gwynnie, her outpouring of emotion has delivered some of the most memorable acceptance speeches in awards history (who can forget Kate’s breathy declaration of love for Leo DiCaprio in 2009?).

But not this year. While Winslet’s performance in Mare of Easttown is widely heralded as award worthy, there is no publicity fanfare pushing her glory this morning.

I usually wake up to a barrage of press releases from studios quick to scream about their dominance at any major awards ceremony, but this year’s bizarrely muted Globes affair is awkward beyond even Hollywood standards.

The full list as Will Smith, Nicole Kidman, Kate Winslet and more are honoured at low-key awards

The Globes always took themselves less seriously than the Oscars and Baftas (rather than have everyone watch from the audience, they sat nominees at tables and plied them with booze) invariably making for the most entertaining evening of the awards season.

But while for 78 years it grew in profile, for many years it was ridiculed. The writing was perhaps written on the wall in 2020 by Ricky Gervais who, as host, hit out at pretty much everyone in the room, accusing the Hollywood Foreign Press Association, which organises the event, of hypocrisy and corruption.

But publicity, shiny statues and free designer dresses are hard to resist and with studios keen to capitalise on the marketing opportunity a major award nomination brings – the awards limped on into 2021.

Alas, an LA Times investigation questioning the ethics of the Hollywood Foreign Press Association (HFPA) in taking "freebies" designed to influence votes, and exposing it had zero black members, was harder to ignore.

While the HFPA told Sky News this weekend it was "okay" with the event being scaled back (with no nominees in attendance, no red carpet and no televised ceremony after NBC cancelled the show), and that it has banned freebies and added 21 new ‘more diverse’ voting members – it seems it was too little, too late.

It’s all a bit discombobulating because Hollywood loves a tale of comeuppance and retribution, so we welcome a major Hollywood organisation being forced to get its house in order.

But also, perhaps especially in COVID-times, we are keen for the opportunity to celebrate – and we are no less pleased for our fave Brit actors Benedict Cumberbatch and Winslet and for our fave TV series of 2021 Succession, or that Jane Campion won best director or that Will Smith finally won his first major acting award.

And it’s a shame that the Globes’ mistakes of the past are preventing less established winners from experiencing the full throttle celebrations that usually come with a Globe.

West Side Story star Ariana DeBose quite rightly welcomed her win on social media, but with a caveat – in acknowledging there is still work to do [on diversity].

But is this enough to feel encouraged by? Can we even feel cheered that the A-listers – by distancing themselves from the Globes – have put their conscience before their ego this year?

And if so, is it reflective of a broader change in Tinseltown – a business that claims to be attempting to clean up its act on so many things from corruption, to diversity and abuse?

More interestingly, the studios which picked up the most Globes – Netflix, HBO and 20th Century Studios (owned by Disney), would usually be screaming from the rooftops and printing off new film posters with ‘x number Golden Globe winners’ in bold letter across the front.

But this year; not so much bravado as restraint. Rather than blushing with pride, it’s a tale of hushing with caution in the ongoing reckoning of Hollywood.