COVID: When will the UK ‘transition from pandemic to endemic’ – and how would we learn to live with coronavirus? 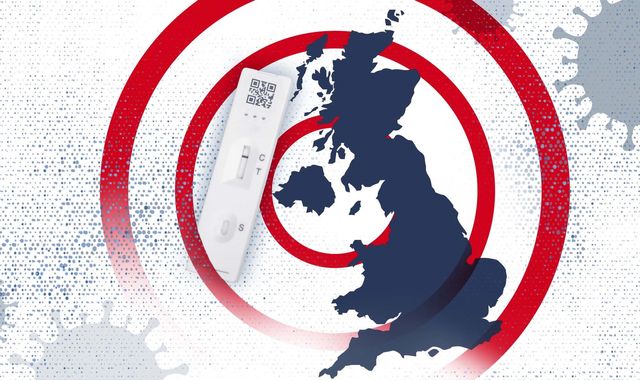 There is hope within government that the UK can be among the first countries worldwide to “transition” from coronavirus being a pandemic to endemic.

Education Secretary Nadhim Zahawi told Sky’s Trevor Philips on Sunday: “I hope we will be one of the first major economies to demonstrate to the world how you transition from pandemic to endemic.

“And then deal with this however long it remains with us, whether that’s five six, seven, 10 years.”

But scientists have disputed this, saying a virus “isn’t endemic just because a government minister says it is”.

Sky News looks at what the term endemic means and what “living with COVID” would look like in the UK.

What does endemic mean?

A virus is endemic when there are “persistent, low or moderate levels of disease” in a given geographical location, according to the Communicable Disease Control Handbook.

It becomes an epidemic when the “occurrence of infection exceeds the expected level for a given time period”.

The word pandemic refers to when “an epidemic spreads over several countries or continents”. The World Health Organization (WHO) declared coronavirus a pandemic on 11 March 2020 and will also likely announce when it no longer has pandemic status.

Professor Christina Pagel, member of Independent SAGE, told Sky News that endemic would also mean COVID is “present, but you don’t get exponential rises in the absence of other measures”.

“We’ve literally just had a month of exponential rises of Omicron in our population – so we’re not at endemic stage,” the UCL professor in clinical operational research said.

“You can’t just say we’re moving from pandemic to endemic. That’s the virus’ timescale. It’s not ours.”

“If that is a key part of the definition, we are very definitely not in endemic phase,” he says.

“We know that more variants are arising and will continue to arise. We know the ones that become significant will either be more infectious or better able to evade immunity from previous infection or vaccination.

“There is also no guarantee they won’t be more virulent, which means we cannot predict when the next variant or next wave of infection will hit us – or how severely it will affect us.”

The term endemic is often conflated with the idea of “learning to live” with COVID – particularly after studies showed the Omicron variant to be less likely to result in people being hospitalised.

But Dr English says: “Most diseases are endemic – it’s an unremarkable thing to say. Just because a disease is endemic, doesn’t mean it’s harmless.”

Asked about Mr Zahawi’s comments, he adds: “What he means is ‘we are going to stop trying to do anything about it – and allow it to rip through the population’. That’s not what endemic means.”

Professor Pagel says “learning to live with COVID” is about “creating a safe environment whereby we can have as normal life as possible”.

In day-to-day terms, she claims it would require people being “as safe indoors than it is to be outdoors”.

What would an ‘endemic’ strategy look like in the UK?

On Monday, Boris Johnson’s spokesman said it is “probably too early to say” if COVID is endemic in the UK yet.

But he said it is “certainly our expectation that at some point that is where we will get to”.

Graham Medley, infectious diseases modelling professor at the London School of Hygiene and Tropical Medicine, said endemicity would involve the government “making cost-effective decisions” on which measures are best for overall public health.

“I think that approach will become more and more likely as we go forward,” he told BBC Radio 4’s Today programme.

Dr David Nabarro, WHO special envoy on COVID-19, added that there is “no scope” for any further “major restrictions” such as national lockdowns in “any country”.

“People have got to just keep working,” he told Sky News. “So there are some very tough choices for politicians right now – it’s going to be difficult for the next three months, at least.”

On jabs, Dr Clive Dix, the former head of the UK’s vaccine taskforce, suggested the mass COVID inoculation programme should end after the booster campaign.

He said that with a “much milder variant”, it would be “pointless” to give more jabs to people who are not likely to fall seriously ill with COVID.

“People should go to work, go about their business, and if they get ill, go home. But we need to stop fixating about case numbers and stopping those numbers because we’re not going to,” he said.

Self-isolation could be reduced to five days

The government has also said it is “looking at the science” on reducing the self-isolation period from seven days with two consecutive negative lateral flow tests to five.

People in the US can leave isolation after five days. But their first day is counted as the day they test positive, not when they develop symptoms – as is the case in the UK, if that comes before test results.

A recent study by Japanese public health officials shows that with Omicron, most people are still infectious on day five.

Therefore, as with the current rules, it would only be safe to release people from quarantine early if they tested negative, Dr English says.

“After five days, the risk of spreading the disease is lower, but it’s about whether we accept that risk – and whether the inconvenience of not being able to work is higher,” he says.

He adds that “ideally” people would also be free of symptoms for 48 hours beforehand, which would be “an acceptably low level of risk”.

No more lateral flows for all?

In response to reports lateral flow tests could soon no longer be free, Boris Johnson said on Monday they would be “used for as long as they’re important”.

Professor Pagel commented: “If you had to start paying for LFTs in a few weeks, I think that could be really damaging.

“Because testing is one of the few things individuals have control over as to how they keep their families and contacts safe.”

She added that this would exacerbate health inequalities for poorer people and “cause a lot more spread”.

Dr English suggested that providing surveys – like the Office for National Statistics (ONS) infection survey – were carried out regularly to monitor COVID levels in the community, in the future, testing could be restricted to workplaces and schools.

“It could become more of an occupational health thing, whereby employers give them out – rather than them being something for everybody,” he said.