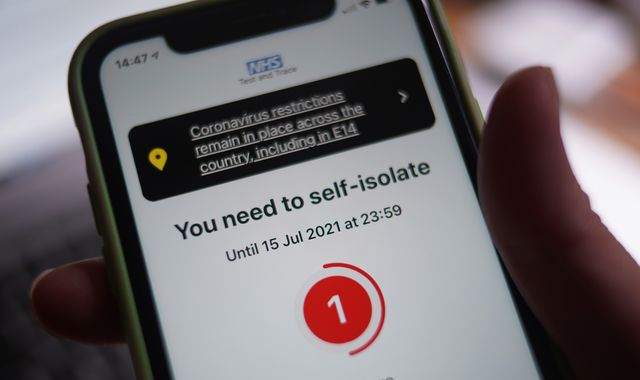 Boris Johnson has said the UK is making “great progress” in tackling Omicron – but warned the variant remains “incredibly contagious”.

Speaking following a pharmacy visit, the prime minister said 36 million people have now received the booster jab and are more protected from Omicron, but acknowledged that the number of people in hospital with COVID is “massively up” and “increasing”.

Mr Johnson also confirmed that ministers are considering reducing the self-isolation period for fully vaccinated people who test positive for the virus.

His comments come as the PM faces growing pressure from some of his own Conservative MPs to reduce the isolation period to five days from the current seven.

Asked if changes could be made to both the government’s isolation and lateral flow testing policies in the coming weeks, he reiterated his call for people who have not already done so to “join the movement” and get a vaccination.

“We’re making great progress – the number of people who have been boosted, as I say, is 36 million, 90% of the over-50s have been done – but there are still millions who need to do it,” he said.

The prime minister also noted that “Omicron is still out there and is incredibly dangerous”.

Pressed on whether the isolation period should be cut, Mr Johnson added: “The thing to do is to look at the science. We are looking at that, and we will act according to the science.”

The PM’s official spokesperson later said: “If it is possible to go further, we’d want to act quickly, but it needs to be based on the latest evidence and that work is still ongoing. We certainly haven’t received any further updated advice.”

Labour could back isolation reduction

Labour leader Sir Keir Starmer said he would back a cut in the length of the self-isolation period if it was supported by scientists.

Sir Keir, speaking to reporters via Zoom as he is self-isolating following a positive COVID-19 test last week, said: “I’ll be guided by the science on this.

“If the scientists and the medical experts say that it is safe to reduce the period of self-isolation then I would be inclined to support it.”

Sir Keir added that the continued supply of free lateral flow tests was “absolutely crucial at the moment” and warned against withdrawing “one of the most important means of our protection at the moment”.

Mr Johnson said the government will continue to make lateral flows available “for as long as is necessary”.

Earlier on Monday, Michael Gove refused to deny that free lateral flow tests could be phased out in the coming weeks, less than 24 hours after another minister told Sky News the government would “absolutely not” charge for them.

The housing secretary told Kay Burley that lateral flow tests will be free for “as long as we need them”, but did not directly answer whether they could be phased out in the coming weeks.

Mr Zahawi dismissed a report in The Sunday Times, saying he did “not recognise” the story that the tests could be limited to care homes, hospitals and schools, and people with symptoms, “within weeks”.

‘You shouldn’t go into hospital and then contract COVID’

The prime minister was also asked by broadcasters about mandatory jabs for NHS workers.

“Well, let me just say that I mentioned the 18,000 people with COVID currently in hospital. That, as you know – as everybody in the country knows – is massively up and the numbers are increasing,” he said.

He continued: “Now, to me, that is just not acceptable. You shouldn’t go into hospital and then contract COVID. So it is very important that our NHS staff should be properly protected, should be properly vaccinated – and I certainly encourage that.”

It comes after Sky News filmed the health secretary being directly challenged by an unvaccinated ICU doctor about the soon-to-be legal requirement for NHS workers to get jabbed.