COVID-19: Ikea cuts sick pay for unvaccinated staff who have to self-isolate 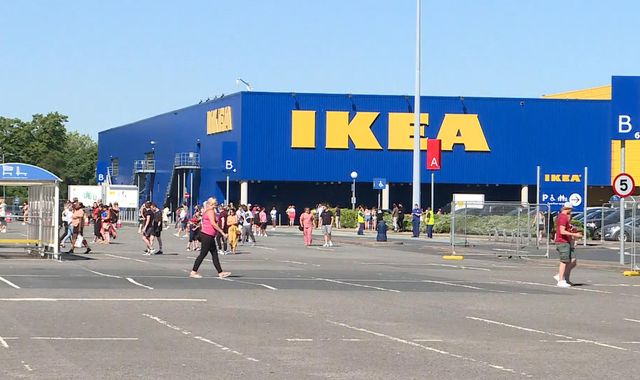 Ikea has cut sick pay for unvaccinated staff forced to self-isolate because of close contact with someone who has COVID-19.

The furniture retailer said workers who have not been jabbed will receive only statutory sick pay of £96.35 a week if they have to stay at home for that reason.

The company, which employs more than 10,000 people in the UK, said that unvaccinated employees who test positive will receive full company sick pay, which is higher than the statutory level.

But staff who are vaccinated – or unvaccinated due to mitigating circumstances which could include pregnancy or other medical grounds – will receive full pay if they are off for COVID-related reasons.

A spokesperson said: “We know this is a highly emotive topic and we appreciate there are many unique circumstances.

“As such, all will be considered on a case by case basis.”

The policy, which took effect in September, was first reported by the Mail on Sunday.

It comes as Wessex Water revealed that it was taking a similar approach from this week.

The company said that any employee who has not had at least one COVID-19 vaccination – without a valid medical reason – or does not have a confirmed appointment for a jab would only receive statutory sick pay if required to self-isolate due to contact with a person who has tested positive.

Wessex Water, which serves 2.8 million customers across the south west of England, employs more than 2,500 people.

A spokesperson said: “The vast majority of our workforce has been vaccinated and it’s important as a company providing essential services with key worker employees, the remainder get vaccinated to protect themselves.”

The company said absences due to COVID had doubled with almost 4% of the workforce affected last week.

Some businesses across the globe are becoming more insistent on their employees being jabbed.

US staff at banking giant Citigroup who have not been vaccinated by 14 January will be placed on unpaid leave and fired at the end of the month unless granted an exemption, according to a memo seen by news agency Reuters last week.

Other big American employers including Google and United Airlines have also introduced “no jab, no job” policies with varying degrees of strictness.

In the UK, the boss of Iceland last week told Sky News of his frustration at restrictions being imposed on the economy “for the benefit of unvaccinated people”, as the supermarket chain revealed that more than one in 10 of its staff were isolating.

France’s president Emmanuel Macron has said he wants to “p*** off” and make life harder for people who refuse to be vaccinated.